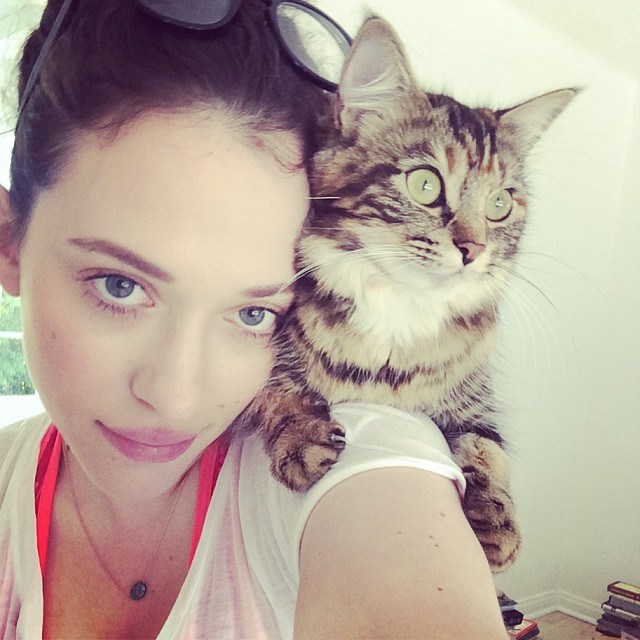 If you own a cat, and especially if you own more than one, and most especially if you're a female, you have probably been called a "crazy cat lady" at some point. There have probably been some jokes made at your expense, like how you will be single forever, or how you will be featured on an episode of "Hoarders" sitting in a recliner chair in a living room filled with cats and empty litter containers. Let’s face it, the cat lady image needs some serious rebranding. Luckily, as more and more cool women adopt and love cats, the stigma is slowly fading. So with that being said, let’s take a moment to acknowledge and appreciate some of the fun, talented celebrities who are reinventing the cat lady image!

Perhaps the most famous cat lady there is, Taylor Swift has solidified her unofficial title as Queen of Cat Ladies. She makes owning and loving cats look cool and hip rather than crazy and sad. Her adorable cats, Dr. Meredith Grey and Detective Olivia Benson, are named after the main characters from Swift’s favorite shows "Grey’s Anatomy" and "Law & Order: SVU". The cats pop up on Swift’s Instagram feed, and Swift is always happy to talk about them in interviews.

Millie is the name of Kat Dennings's beloved feline friend, and she is purrfect. Kat proudly posts many photos of her pal Millie on her Instagram feed and social accounts. She even confessed to "Conan" that she feels her cat is so beautiful she deserves to be seen, and we have to agree. Dennings is an animal lover in general, regularly posting cute animal videos and photos to her Twitter. However, we’d like to claim her as a cat lady because she adds to the group’s coolness.

Even though Kate Mckinnon only has one cat, her love for him is enough to get her on this list. You’d be hard pressed to find an interview where Mckinnon doesn’t mention her beloved cat Nino, whom she also refers to as her son. He was cleverly named after the pizzeria he was found outside of. He is overweight and adorable. If only Mckinnon had social media so we could get regular photos of the chubby little guy!

As if her love of adorable cat videos wasn’t enough to convince you of Ellen Degeneres’s cat lady status, then her number of cats she lives with will. Ellen has three cats named Charlie, George, and Chairman. Ellen and her wife Portia De Rossi rescued her whole adorable brood. They also have three dogs, so Ellen might be one of those rare people who don’t have a preference between dogs and cats, or loves them both the same. Nevertheless, she’s still a cat lover.

Debby Ryan has firmly solidified her title as a cat lady, and her fans love it. They even have created a Twitter account for her feline friends called Cats of Debby Ryan. She has two cats, Jac and Velma, one of whom was recently pregnant and gave birth to some adorable kittens. Ryan posted pictures of the kittens on her Instagram account before finding them all new homes. Debby’s social media is full of pictures of her cats and captions that gleam with pride at her little furry companions.