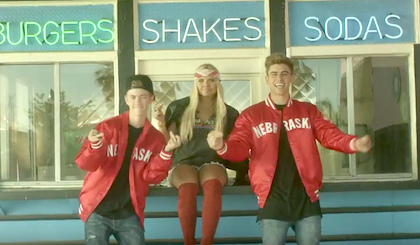 Alli Simpson just released her brand new music video for “Roll ‘Em Up” and we are IN LOVE with it. The song, written by her brother Cody Simpson and Selena Gomez, has a great vibe to it, and if you don’t want to be in Alli’s s squad after watching this video, well... just watch it a few more times because you will. I promise.

This was such a great location for the video. The song has an old school feel to it while having a present day sound. I liked that the video was shot at a '50s-style café with old vintage cars and looks like it could have been straight out of Grease. And who doesn’t love Grease? (It is the word, after all.) Not to mention, how cute were those Pink Ladies jean jackets? I want one! Maybe this is more Back To The Future than Grease, depending on how you look at it. You may also see Madison Beer make a cameo as one of the Pink Ladies.

These two are the absolute best. Musical geniuses. We were so happy when we found out that the boys would be featured on the single and in the video. Alli and the Jacks play off one another really well. It comes naturally to them and we can see why they decided to collaborate. Hopefully this means more collaborations in the future for these three. They are also ambassadors for Mudd together -- you can see a few Mudd Style posters throughout the video. It for sure goes along with the short shorts theme!

Overall, this video is fierce, fun, and has a lot of yummy food. Yes, the food may have been fake, but who cares when the video is that good. Alli may only be 17, but she is absolutely building her credibility as an artist to watch.

BIG congratulations to Alli on a successful video! Can’t wait to see more from her.