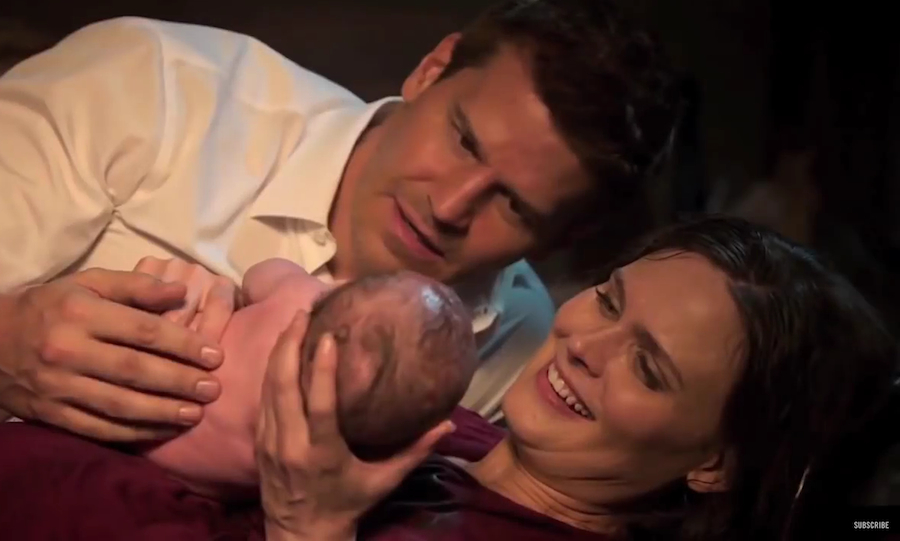 In a time where most TV shows are lucky to last 2 or 3 seasons, it’s incredible that Fox’s hit series "Bones" managed to last for 12! That's right up there with other classic TV hits like "CSI", "ER", and "Law & Order". No other show had the kind of chemistry, personal interaction, and mix of comedy and drama quite like what we saw in "Bones". We will greatly miss watching forensic anthropologist Dr. Temperance "Bones" Brennan (Emily Deschanel) work alongside FBI Special Agent Seeley Booth (David Boreanaz) and her team of “squints” at the Jeffersonian to solve crimes.

So as a way of saying goodbye and to further preserve memories after the show's series finale last night, we wanted to showcase our 12 favorite moments we loved from each season! (Warning: potential spoilers!)

We enjoyed Booth’s introduction into the show -- by having Brennan detained at the airport, all so that he could personally pick her up and escort her to the crime scene which interestingly enough was the murder of a girl, that was found at a cemetery.

We all know that besides being “the best forensic anthropologist”, Brennan is also a published author, but in Season 2 Episode 15, the murders that she writes about in her book come to life, and they must figure out who the perpetrator is. What’s unusual about these murders is that the team knows what will happen to each of the bodies -- they just have to figure out the killer. Surprisingly, that remains the hardest task.

Some of the most interesting murders are uncovered by the team, including the Soccer Mom in the mini-van. The team is sent in to uncover what happened to the Mom after she gets blown up by a bomb planted inside her car, which was set to go off just as she was arriving to pick up her daughter. Kind of traumatic, right? Then we find out the soccer mom isn’t just a mom but a mom involved in criminal activity and the family had no idea.

This was an interesting season, as we are taken across the Pond to investigate a murder that happened to someone in the U.K. We were riveted as Brennan and Booth tried to solve the murder using their own expertise combined with the methods of the British, which got on Booth’s nerves.

This was definitely one of the more scary seasons. Serial killers come into play, which means more death and more work for Bones and her team. You probably found it difficult to sleep at night after watching these episodes. Luckily, though, the chemistry among the team members, who had to work even more closely together than ever, made all the nightmares worth it.

OMG we loved this season finale. Brennan tells Booth she’s pregnant with his baby and their romantic journey unfolds. But it’s the way she tells him that we love. She alludes to the fact that she’s finally ready to start their life together, and as he loves her, she now loves him. SWOON!

In Episode 13, we get to experience Brennan and Booth’s personal life while working on a case. We see that, for the first time, Brennan's emotions due to her pregnancy cause her to act more affectionate towards Booth. We just found it cute to see this romantic gesture and we enjoyed seeing how he wanted more after realizing what she was trying to do -- be more human and less so involved with work for a second.

Episode 1 is by far the most interesting, as Brennan must go on the run with her daughter, leaving behind the people and job she loves  until they figure out who accused her of murder. We get to watch the toll that this takes on Booth, see how distraught and determined he is to get whoever did this to his wife. Although, we do know that when they finally reunite, things won’t be the same...

Best season yet with the best episode: Brennan and Booth’s wedding day! His vows to her were perfect and they foreshadowed that as long as they had one another they could overcome anything, just like they always had.

This season, especially the first episode, had the most drama involved, but it’s what made us love it. We see that Booth is in jail after being wrongly framed for a murder he didn’t commit. We see Brennan hard at work trying to figure out who would do such a thing. She has to really dig into his past but she also has to figure out how to comfort her daughter through this drama. It can’t be easy. Like I said before, no matter what befalls them, they are always there for each other and are willing to help when the other’s in need.

It’s about time a crossover episode occurred, and what’s more exciting than watching Brennan and Booth work with the cast of "Sleepy Hollow" to solve a crime? Nothing! The murder they uncovered was Sir William’s Howe, a British General during the American Revolution -- how exciting!

Zack returns but he also ends up kidnapping Brennan, which is interesting because Brennan goes missing and Hodgins works with the team to discover what happened to her. He works not only as her friend and her teammate but her loved one.

We can’t wait to see what Boreanaz and Deschanel’s next projects are, as well as creator Hart Hanson. Thanks for 12 amazing years!