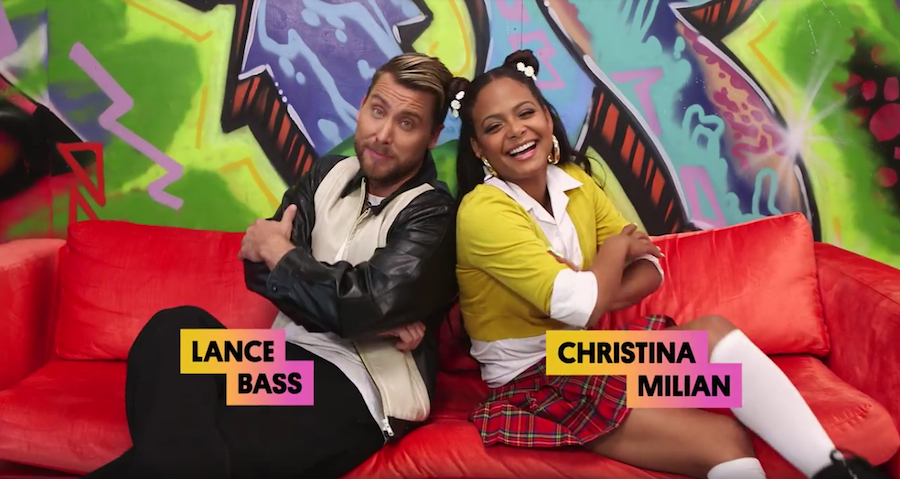 MTV is hitting the rewind button and bringing '90s babies and other Millennials alike on a walk down Memory Lane. Not only are they bringing back "TRL", but they are also premiering a new show called "90s House".

The show is a reality game show with twelve Millennial house guests in a '90s-style house where they must say goodbye to their phones and "modern-day devices and party like its 1990," according to show info. The housemates will be transported back to the '90s complete with fashion, slang, and everything '90s. Every week they will compete in elimination challenges, and at the end of the show, the winner will receive $90K, a Mazda Miata, and tickets to a '90s theme cruise!

As you saw in the promo, Lance Bass from *NSYNC and actress/singer Christina Milian will be hosting the show. Shall we flashback to see their '90s cred?

But what else can you expect from the show? Here are a few things I absolutely hope/want to see in that house and I would be fully disappointed if they didn't make some kind of appearance.

Remember popping in your favorite VHS into the TV only to see that your brother didn't rewind the tape after he watched it? THE WORST. Kids today will never know the struggle.

Every guy wanted her and every girl wanted to be her in the '90s. The iconic pop princess of the decade needs to have a place in this '90s House. If she doesn't, I riot.

Yeah, forget Pokémon. Tamagotchi was the beginning of pocket pets, seriously! This is was as close as we could get to a pet if your parents wouldn't let you have one. It was a small digital keychain shaped like an egg, and on the screen was your new pet friend. You had to feed it, play with it, and if you neglected your Tamagotchi, it would die!

Tamagotchi come to life. I distinctly remember my parents fighting the toy store for the Furby shortage. These cute little troll/gremlin-like pets talked and moved. Were they a little creepy? Yes. Did we care? No. They have to have a room dedicated to Furbies in that '90s House!

Furbies weren't the only toy craze of the '90s. The collectible Beanie Babies obsession was insane. Almost as bad as the Pokémon card collection, collecting Beanie Babies was no joke. My parents grabbed some really rare collectibles at the swap meet. But now that I think about it, we had almost 100. Where did they all go?

You were so cool if you had one of these in the '90s, even if no one knew what all the buttons did. Mine was baby blue. 'Nuff said!

Honestly, I think we can thank Lisa Frank for the rainbow and unicorn revolution. Without her whimsical artwork and colors that we all had a kids, our lives would be dull and unimaginative. Not to mention she had the cutest animals and rainbow colors on her products. She was way ahead of the curve.

This console introduced me into the Super Mario Bros world and it will always have a place in my heart. It also taught me to be competitive and take no prisoners in Mario Kart.

Why these were so popular, I will never know but I still get excited when I see them today. Literally, a flexible steel band covered in fabric or silicone that became a bracelet when kids would hit it on their wrist. And it did hurt! But I took the pain because ... I thought it was cool. #smh

Saved By The Bell

Oh, Zack. [*daydreams*] Oh, Slater. [*fantasizes*] Oh, Screech. [Ew.] One of the most iconic shows of the early-'90s, "Saved By The Bell" followed a group of friends in high school with 4th-wall breaking from the main character, Zack Morris, to let us all know how he really felt. I still ship Zack x Kelly.