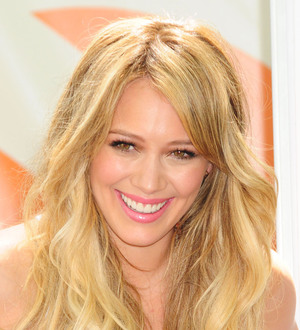 Hilary Duff doubts she will be receiving any big gifts from her hockey star husband Mike Comrie when they celebrate their first wedding anniversary on Sunday (14Aug11) - because he just bought her a car.

The couple is planning to mark the special date with a hotel and spa stay just outside of Los Angeles, and the Cheaper By The Dozen star admits she's so spoiled by Mike Comrie, she isn't expecting any surprises this weekend.

She tells Eonline.com, "He's a really good gift giver. He just bought me another car, so I don't think I actually need anything. I would feel bad for asking."

But that doesn't mean she isn't secretly hoping for a pricey present.

She says, "I would love a ruby. You know what? There's this green YSL (Yves Saint Laurent) bag that I've kind of been hinting at lately that I really want, so maybe he'll get the hint. But if not, I'll still love him."

And Hilary Duff is looking forward to spending a little more quality time with the sportsman before deciding to settle down and start a family.

She adds, "I think it was important to us that we had a year to just do whatever. And maybe longer than that because we enjoy having so much freedom. But we're thinking about it."