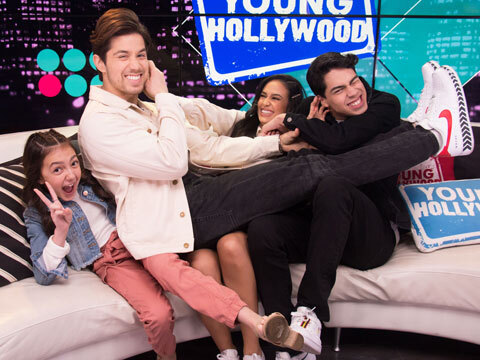 Party of Five Cast Interview Each Other & Reveal Set Secrets

It's a party of four at the Young Hollywood Studio as the cast of Freeform's new "Party of Five" reboot (minus one since, you know, he's a baby and they are notoriously difficult to interview) stop by to give us all the scoop on this much-anticipated update to the classic '90s Fox drama of the same name! Brandon Larracuente, Emily Tosta, Elle Paris Legaspi, and Niko Guardado take matters into their own hands as we invite them to interview each other and spill all the fascinating behind the scenes tea! Find out which of them is most likely to take a nap between scenes, play pranks, and hang around the craft services table, plus the actors reveal what Netflix series they'd love to do a crossover episode with and dish (spoiler-free) on their own personal favorite episodes!