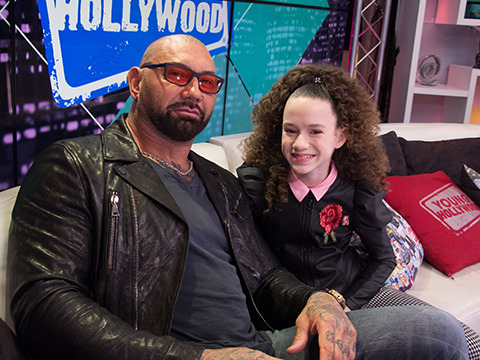 It's a known fact: big scary guys plus sassy little kids is always a winning combo on the big screen! It's a formula that has worked since before movies had sound, and over a century later, we still can't get enough of this opposites-attract dynamic! This time around, WWF wrestler and Marvel Cinematic Universe warrior Dave Bautista is paired up with the adorable Chloe Coleman in the action comedy 'My Spy'! The twosome stopped by the Young Hollywood Studio earlier this year to show off their endearing chemistry and give us a taste of what it was like working with seasoned comedic actors on the film, including Ken Jeong and Kristan Schaal. Dave tells us about Chloe's admirable work ethic, which included not only knowing her own lines but his as well, and how he may have finally met his match physically when it came to a particularly difficult ice skating scene! Plus, find out who on set was the worst offender when it came to coughing up cash for Chloe's swear jar!