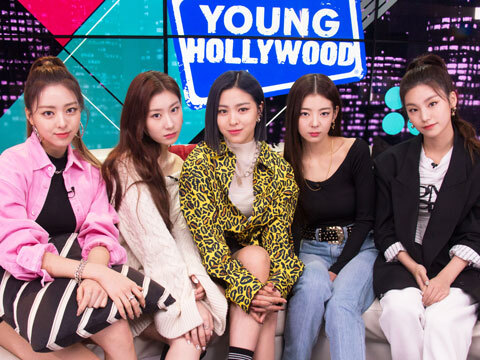 After making the rounds on all of South Korea's most popular talent competition shows, JYP Entertainment finally realized the gold that needed to be mined and combined the skills of five young K-pop hopefuls to form the girl group Itzy, and the rest is history! It's been a whirlwind year for Yeji, Lia, Ryujin, Yuna, and Chaeryeong, with on EP and 2 hit singles under their belts! Now they're making their American debut with their first U.S. tour, which kicked off in L.A., so naturally we had to invite them to the Young Hollywood Studio! The ladies gather on our white couch to scoop us on the story behind their group name, plus they reveal who they would love to collaborate with, hit us with some aegyo, and they teach us some signature dance moves from their songs "Dalla Dalla" and "Icy"!