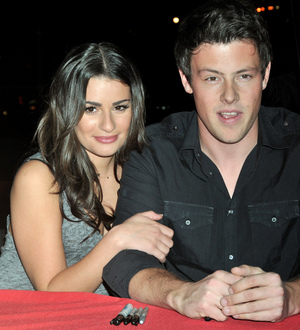 Glee stars Lea Michele and Cory Monteith are dating after spending Valentine's Day (14Feb12) together in Los Angeles, according to a new report.

The actors have portrayed an on/off couple on the hit TV musical since its launch in 2009 and it seems their onscreen chemistry has since spilled over into their personal lives.

Editors at Life & Style magazine claim Monteith treated the 25-year-old beauty to a cosy dinner date at Il Covo restaurant on the most romantic day of the year - and they were not shy with their affections.

An eyewitness tells the publication, "They were into each other all night. She was very happy, flirting and touching Cory a lot. He just stared at her with puppy-dog eyes."

They were also allegedly spotted together at the Ritz-Carlton hotel in L.A. days later.

Michele has made no secret that she's a fan of Monteith, admitting last year (11), "As long as I get to have scenes with Cory, it makes me really happy."

The singer/actress split from her longtime boyfriend Theo Stockman in September (11).

Highlights From The 80th Annual Golden Globes Nominations!
Breaking Down The 2023 Oscar Nominations!

Breaking Down The 2023 Oscar Nominations!
Looking Back On Days of "Auld Lang Syne"