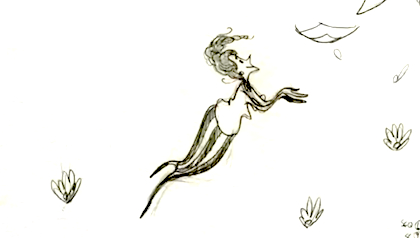 While many Angelenos headed to celebrate Hello Kitty Con 2014 -- a full-blown convention celebrating the 40th anniversary of everyone’s favorite mild-mannered cats -- this weekend, others honored one of art’s most difficult mediums: animation. The World Animation Celebration, sponsored by The Los Angeles Film School, Toon Boom, and Reel FX, paid homage to some of the finest animated shorts from around the world. Over 100 different films were shown over the course of the day, and there wasn’t a shabby one in the bunch.

"Guida", a haunting short about a middle aged woman given a chance to prove herself, took home the honors for Traditional Animation. Judging from the animation, it seems that this was a deserved win; although "Guida", created by Brazilian director Rosana Urbes, has hardly any sound and is quite stark, its simplicity works its in favor.

As a fan of stop-motion animation, I was particularly impressed by the winner, Amy Lee Ketchum’s short, "Two Ghosts". Like "Guida", "Two Ghosts" is absent of sound and is a rather disturbing tale of loss and loneliness. Described as a darker version of Jim Henson’s work, Ketchum’s characters bring to mind the more playful style of Wes Anderson -- although the sheer level of detail she put into her sets and characters is quite impressive. Take a look at just how detailed these bunnies are!

The festival also featured panels on the world of animation from seasoned professionals, as well as lectures from guest speaker big-shots Floyd Norman (Disney) and Michael Leon-Wooley (voice actor for animated films).

I’m definitely going to make an effort to make it out to to this festival next year. As a huge fan of animation, I always enjoy seeing what these talented filmmakers come up with. In the meantime, you can learn more about the films that were showcased at this year’s festival here!