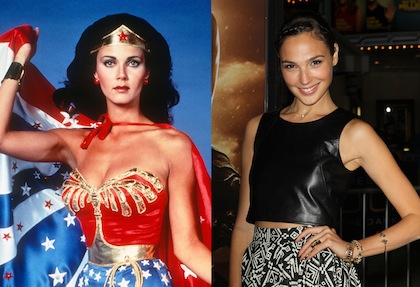 For those still reeling about “Batfleck”, looks like you might have something else to distract you in the upcoming Batman Vs Superman flick – none other than the Amazon Princess herself, Wonder Woman!

Yes, it’s true, after years and years of speculation, starts and stops, and rumors, Wonder Woman will finally be leaping onto the big screen care of Zach Snyder’s 2015 follow-up to Man of Steel. And who, pray tell, will be tasked with bringing the legendary superheroine to the big screen? Israeli actress and model Gal Gadot, best known as Giselle from the Fast and Furious franchise.

The most recent rumors swirling about a possible big-screen WW centered around Jaimie Alexander, who has appeared in both Thor movies as the female Norse warrior Sif. In my opinion, she would have been a mighty nice choice – she has the look, and she can convincingly kick some villainous arse. The problem, however, lay in the fact that she is considered Marvel property – to jump ship onto a DC franchise would be a bit of a no-no, no?

While we don’t yet know how Wonder Woman will even be portrayed in BvS, based on all the things we DO know about the character, all I can say is this – Ms. Gadot has one or two protein shakes in her immediate future! She’s a lovely girl, don’t get me wrong… But is she “Amazonian”? Ehhh, not quite. At least not yet. Even though WW is bestowed with supernatural powers thanks to her divine lineage, we still need to believe that she can tussle with even the heartiest men. Remember, Amazons are warriors who have no need of men except for, ahem, continuing the species. Does Gal Gadot strike you as the warrior type?

As with Ben Affleck, I’m willing to keep an open mind, of course. It’s clear that Snyder and Co. are definitely preparing for a pentultimate Justice League franchise to compete with the mega-successful Avengers movies and spin-offs. So, Gadot is likely in this for the long haul and will possibly get her own movie at some point. We hope she’s up for the task!

In the meantime, one wonders why Warner Bros. didn’t give THIS gal a call – I bet she would have been available!