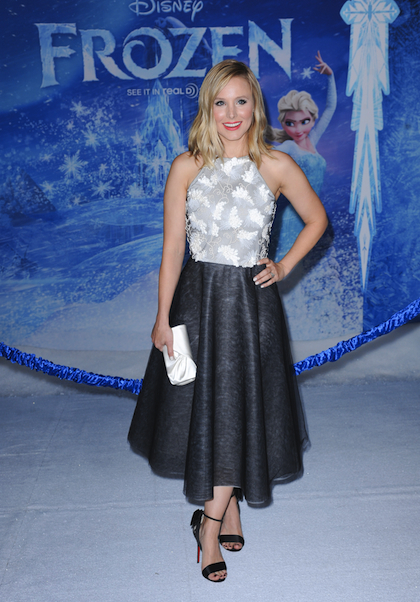 Move over, caped gentlemen crusaders -- it’s the ladies’ time to shine! Hollywood had its most prosperous Thanksgiving Weekend to date thanks to the record-shattering box office earners Frozen and The Hunger Games: Catching Fire. The latter brought in $110.2 million from 4,136 theaters over the five-day holiday weekend, and has now earned $296.5 million total. The film is now the top Thanksgiving title of all time, beating out Harry Potter and the Sorcerer’s Stone. Catching Fire picks up right where The Hunger Games left off, with Katniss (Jennifer Lawrence) and Peeta (Josh Hutcherson) embarking on their victors tour when President Snow (Donald Sutherland) informs Katniss that she must convince the people (including himself) that she really is in love with Peeta and that her attempted suicide in the arena was not an act of defiance to spark a rebellion. The film follows Katniss as she tries to quell a revolution among the districts... only to end up in a nasty all-star edition of the Hunger Games.

Meanwhile, Disney’s Frozen opened Wednesday and had the best Thanksgiving debut of all time. The film brought in a whopping $93 million. The film also marks the top opening for a Disney Animation Studios film. Frozen is loosely based on Hans Christian Andersen’s fairy tale, The Snow Queen, with Kristen Bell voicing Anna, a princess who sets off on a journey to find her sister, Elsa (Idina Menzel), who has accidentally caused an eternal winter in their land. Along the way, she meets a snowman (Josh Gad) and a burly woodsman (Jonathan Groff) who join her on her journey. The film has won an A+ on CinemaScore and is continuing to charm audiences.

Let’s hear it for the ladies! It’s about time that Hollywood realized that films starring strong female leads can bring in just as much (and in this case, more) money as films with male leads. Hopefully, film studios will pick up on the success of these two films and decide to make more films showing ladies taking charge. Women are more than just the pretty girlfriend or quirky friend. They deserve to be shown saving the world. After all, that’s what we help do on a daily basis in real-life!