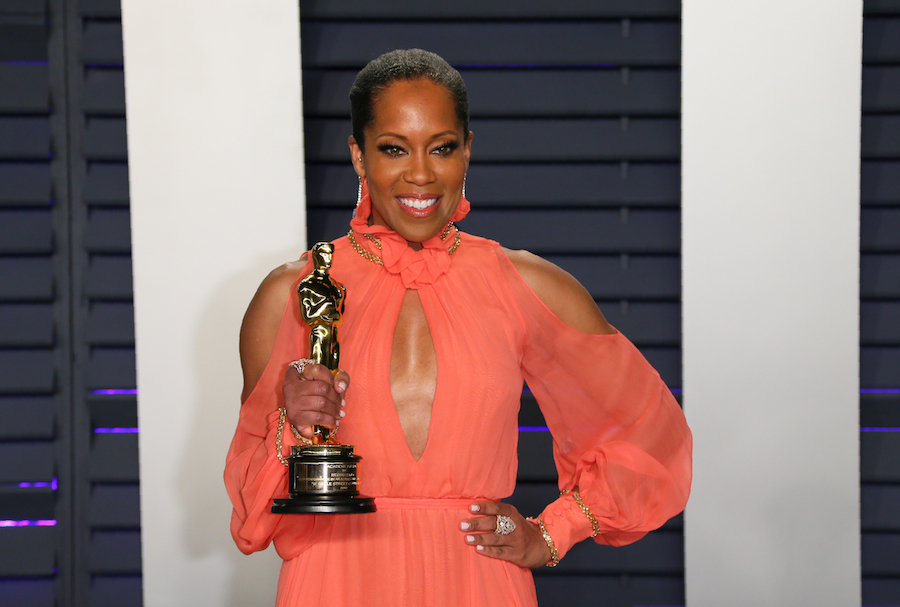 What a year this woman has been having. Regina King is finally at the forefront of all the Award Season attention and we couldn’t be happier. Honestly, we though she deserved an Oscar for playing Fiona in A Cinderella Story, but at least the rest of world has caught on to her genius (they are definitely late to the party, though).

Regina started her acting career back in 1985, playing Brenda Jenkins on the popular television series "227". She was there until the show ended in 1990 and caught the eye of director John Singleton, who cast her in three of his subsequent films: Boyz in the Hood, Poetic Justice, and Higher Learning. From there, she was featured in a few different comedies (Friday, A Thin Line Between Love and Hate), but she really got her big break when she appeared in the blockbuster hit Jerry Maguire opposite Tom Cruise and Cuba Gooding Jr.

And then came what I like to call the Regina King Golden Years. She was one of the most recognizable faces, popping up in literally all of our favorite movies. To name a few: Legally Blonde 2: Red, White & Blonde, A Cinderella Story, and Miss Congeniality 2: Armed and Fabulous. We love a woman with good taste in movie roles!

In the mide-2000s, Regina moved back to television, bagging ongoing roles on multiple TV series, including acclaimed work as Detective Lydia Adams on the TNT police drama "Southland". And then, finally, she started to get recognized for the incredible actress she is.

Regina joined the ABC ensemble drama "American Crime" in 2015, where she played a devout Islamic woman and the sister of a drug addict accused of murder. It was an intense and focused role that won her the Emmy for Outstanding Supporting Actress in a Limited Series or Movie two years running (2015 and 2016). In 2018, she continued her trend of choosing roles that spoke to the epidemic of racial injustice in the United States, playing the mother of a murdered back teenager in the Netflix series "Seven Seconds". This won her a third Primetime Emmy and people officially couldn’t stop talking about her.

That same year, Regina took on a role in the Barry Jenkins-directed film If Beale Street Could Talk. The movie again shined a light on the unjust incarceration of African-Americans and the effects it has on families. If Beale Street Could Talk garnered huge critical acclaim and won Regina the Academy Award for Best Supporting Actress this past Sunday. I’m still clapping.

Regina King now has a Golden Globe, an Oscar, and 3 Emmy Awards. She is an actress, a television director, and the most wonderful role model to Sam in A Cinderella Story. She should truly be all of our role models. We love you, Regina, and congratulations on your first Oscar!!!!