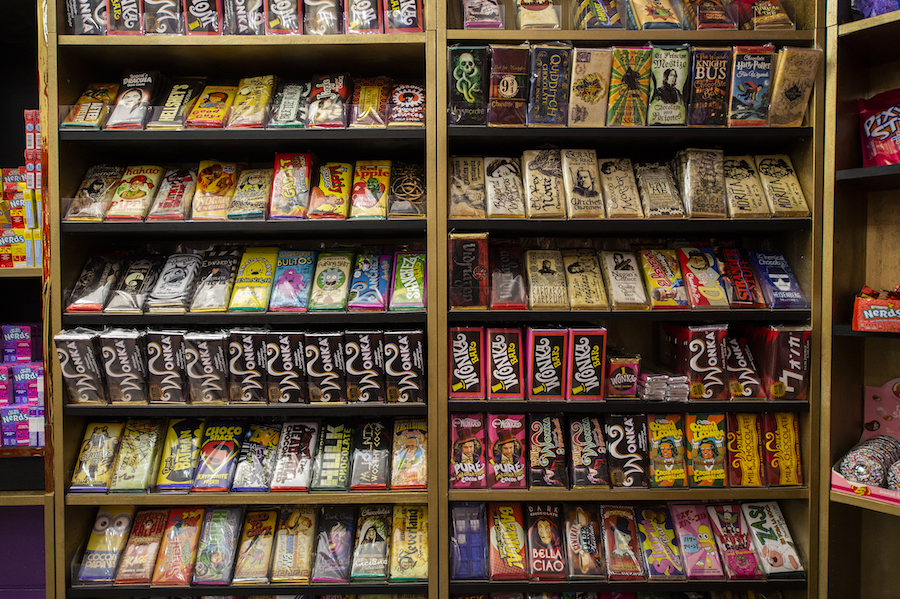 Willy Wonka. Timothée Chalamet. Has there ever been a cinematic marriage more intriguing? Me thinks not.

The news just dropped that Chalamet is set to play The Candyman himself in a Warner Bros. prequel film detailing Wonka’s origin story. This will be the third iteration featuring the quirky Roald Dahl legend, and the first since Johnny Depp took on the role in the 2005 hit Charlie and the Chocolate Factory. Of course, following in Depp’s and Gene Wilder’s (Willy Wonka and the Chocolate Factory, 1971) footsteps is not the easiest undertaking in the world, but I can sort of already see it. The charm, the effortless charisma, the mad scientist-like energy… I’m into it!

But we’re not here to talk about Timothée, we’re here to talk about Willy! In honor of this momentous news, I thought I would spotlight some of Wonka’s most famous candies and rank them based on which ones I think would be the tastiest! And then maybe I’ll throw in a few Heather Originals that I believe would hold up admirably in the Wonka-verse. What’s that, Internet? This is the content you didn’t know you needed? You’re welcome, folks.

And before you ask, no, I’m not going to rank Pixy Stixs and Nerds and that junk. I’m talking the good stuff. Straight from the Oompa Loompas. This should go without saying. Let’s get to it!

Remember that candy that made the Oompa Loompa’s hair grow too long? Assuming the mixture has been worked out by now and the hair growth isn’t too drastic, I’m all for it. Not only am I a HUGE toffee girl, but, because my hair is curly, it’s proven to be a real challenge getting it to grow longer than, say, shoulder length. Not only would this chewy candy solve that problem in a flash, but if my hair gets too long, I can just get it cut and donate the unneeded portions to Locks of Love or something. Win/Win. Plus, talk about the perfect midnight snack!

As somebody who hasn’t had a bite of chocolate since 2011 for no reason other than I’m kind of a psychopath, I can tell you first-hand that this chocolate bar is one of the few cocoa confections that I still crave a decade later. And heck, Charlie found his Golden Ticket in one, right? It would probably be chewy, crunchy, chocolatey, soft, rich… all the things you want from a good chocolate bar. Oh, God. My resistance is waning!

Another Wonka classic, how could this one not make the top 3? Any candy that changes flavors mid-consumption is going to pique my interest, but a candy that changes flavors AND colors ANNNDDD never gets smaller or disappears? I’m all in. I am aware that some version of this exists in real life, but again, we’re not talking about that. I must now confess, I’m not actually the biggest candy eater in the world. I know, I know, I stink! Let’s just move on.

Soft, minty grass serves two purposes: (1) it can spruce up the backyard and (2) it can ease those after-dinner cravings! While I’m not a big candy person, I am a big mint person. And this just sounds delicious. Does it keep growing forever? Gosh, I hope so. And maybe it doesn’t require much water either! That would be nice for this California girl. Speaking of which, wasn’t that Katy Perry music video based on Candy Land? Okay, I’m getting off track.

Hi, I’m Heather and I’m a gum addict. Seriously, there was a time when it was bad. In high school, I could easily chew two packs a day. Yeah, remember that psychopath thing? I wasn’t kidding. I had a problem, and while my gum habit is much more contained these days, I still crave that minty goodness every now and again. But if I’d be presented a gum that doubles as a full three-course meal, forget it. Sure, it didn’t work out so well for Violet, but I would imagine Wonka would have fixed the dessert portion of the recipe by now, so we’d get all of the great taste without the burden of becoming blueberries.

Now we’re really getting into the weeds. Call this the “secret menu” portion of the rankings. This delightful nugget hails from a previously unpublished chapter of Charlie and the Chocolate Factory, and I gotta tell ya, I love everything about it. Sure, some excavation would be required for this to become a retail reality, but these are obviously man-made mountains, so don’t come after me, Greenpeace people! I’m a sucker for some fudge, and vanilla fudge falls under my chocolate-free lifestyle! Ugh, this whole article makes me look totally nuts. But alas, we persist!

So, I know this’ll be the biggest shock of your day, but I don’t have very many friends. And as somebody who doesn’t have very many friends, I get very bored very easily. I can totally see myself solo binge-ing the newest Netflix serial killer special while taking a good lick out of my bedroom wall. Saves me the trouble of walking all the way to the kitchen for a snack! Plus, I gotta see for sure if those snozzberries actually taste like snozzberries! These are the things that keep my up at night, people.

Yes, we all know and love the peppermint patty, but what about the Pumpkin Peanutty Pretzel Patty? Hear me out: the saltiness of the pretzel, the sweetness of the pumpkin, the crunch of the peanuts (or peanut butter), all smushed into one convenient patty. Tell me Wonka couldn’t make this work. I mean, heck, we already know that two of those flavor combinations rock. And peanut butter with pumpkin is basically a fancier peanut butter and jelly. I’ve been campaigning for years to make pumpkin a non-seasonal staple. William, work your magic!

Sure, just a fruit-flavored fudge may sound relatively benign compared to some of the other goodies mentioned above, but what if this fudge had a little bit of a twist to it? Say you’re hanging with your friends, and the party’s a dud. Sneak a bit of some cracking-up coconut, losing-it lime, or slapstick strawberry, and all of a sudden everyone’s having a great time! And what’s more, your comedic genius earns you a date with that person at the party you thought was cute the whole time! Of course, comedy clubs and the like would probably ban this fudge for breeding too many wannabe comics, but for those of us who are maybe a bit shy and need something to help ease social anxieties, this tasty treat is the perfect remedy! And hey, this fudge will even help you realize that making people laugh was within you the whole time, and that you’re a naturally gregarious and humorous individual! The fruity snack is there for you when you need i and always there for support. And it even comes in cantaloupe!

Those last two would be so cool, right? What’s your favorite real- life Wonka treat? I like laffy taffys, the banana ones especially (don’t @ me)! Anyway, I’m so looking forward to Timothée Chalamet starring in this Wonka chapter, I think it’s going to be awesome. Count this as one of those post-COVID premieres I’ll definitely be marking on the calendar!