Why We Love Selena Gomez Like a Love Song 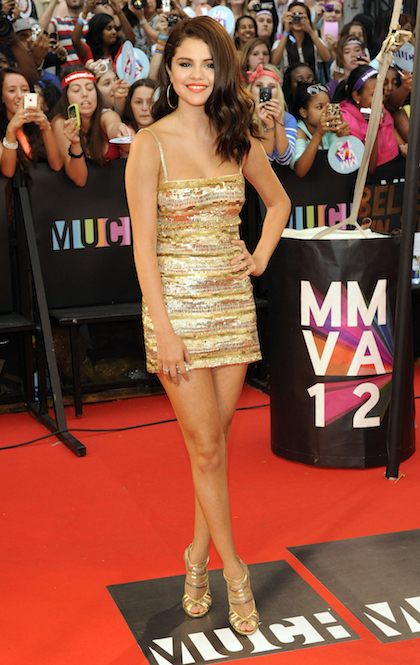 Are you a Selenator? Do you rock out to “Love You Like A Love Song” in the car? Admit it, it’s your guilty pleasure (remember, the act of admitting is the first step to recovery). Listen, I’ll be the the first to own up to my absolute obsession with Selena Gomez. I have all six of her CDs (those plastic contraptions that look like flat doughnuts) and I’ve memorized the lyrics to her chart-topping hits including “Naturally”, “A Year Without Rain”, and, of course, “Who Says”. I’ve yet to see Selena on tour, but it’s on my bucket list (a little birdy told me that she puts on an excellent show). Truth is, I’ve been a diehard Selena fan since before she even blew up in the music scene.

Pre-global singing sensation days, Selena was an actress. She made her debut when she was 7 years old in “Barney and Friends”. Years later, as fate would have it, Selena was discovered by Disney in a nationwide casting call. Soon after, Selena started to pick up roles in several well-known Disney Channel shows including “The Suite Life of Zack and Cody” and “Hannah Montana”. In 2007,  Selena’s career kicked into high gear when she landed a starring role as Alex Russo in the Emmy Award-winning Disney TV series “Wizards of Waverly Place”. This dream job opened many other doors for Ms. Gomez. It gave rise to her band, Selena Gomez and The Scene, and helped them launch an incredibly successful singing career. It also allowed Selena to segue into feature films.

Selena has a number of films to add to her credits, including Wizards of Waverly Place: The Movie, Ramona and Beezus, and Monte Carlo, among others. This list is about to get much longer, as Selena has been cast in SIX other upcoming flicks! When Selena is not acting and/or singing, she is working on her clothing line, Dream Out Loud by Selena Gomez, and fragrance line, Selena Gomez Fragrance Collection, which are both available for purchase. Now, you may be wondering how Selena also maintains a high-profile relationship with the Biebs while having all these major projects in the works. Well, your guess is as good as mine. As for all the rumors about the couple headed for splitsville, they are false. Selena and Bieber were caught smooching in Australia just the other day. Aww!

Although Selena is a mega superstar, she’s not all about the glitz and glam of Hollywood. There is another side to Selena that people have come to know and love -- her philanthropic side. Selena has devoted much of her time and efforts to helping out charitable causes such as St. Jude’s Children’s Hospital, Make A Wish Foundation, and Raise Hope For Congo. In 2009, Selena was named UNICEF’s youngest Goodwill Ambassador. Also, earlier this year, Selena was appointed to ambassador of the Ryan Seacrest Foundation. What a great role model, huh? “Who says, who says you’re not perfect!” Selenita, in our eyes, you are perfect, and we’d like to send you the biggest virtual (early) birthday hug! Folks, get your dancing shoes on because we’re about to rock out to our favorite hits from Selena Gomez and The Scene!

BONUS: Check out Selena's recent visit to the YH Studio!