What's Next for Pau Gasol, and the NBA Playoffs! 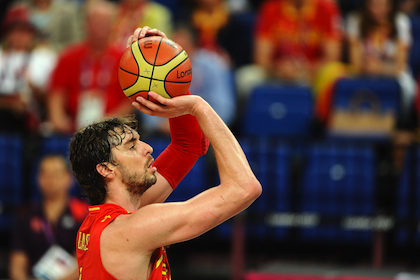 For many Laker fans, this past season has proved to be rather disappointing, but the bigger disappointment for fans is the high possibility of letting go of our loyal and true Pau Gasol.

This upcoming summer, Gasol will become a free agent, and it seems that his time in the purple and gold has come to a close. With the Lakers missing the marks for playoff contention this year, Gasol has had to watch his last home game from the bench due to his injury.

All I can say now, as a life-long Lakers fan, is thanks for everything, Pau! We will miss you.

As I said earlier, the Lakers didn’t make the grade to get to the playoff this year, but they are not the only big team that failed to make it to the post-season. The New York Knicks and the Boston Celtics will join the Lakers in watching the playoffs from their couches. That being said, the NBA Playoffs start next week, and anything could happen!

The number one teams are the Indiana Pacers in the East and the San Antonio Spurs in the West. But the Pacers will have a tough road ahead and will have to prove that they deserve the top seed in the East. Closely behind them are the Miami Heat and the Toronto Raptors. Although the structure of the playoff games makes it so they won’t play each other until later in the post-season, it’s very likely that these teams will clash and anyone could take the top. LeBron James and the Miami Heat are looking fierce and hoping to take the Eastern Conference Championship, perhaps even the whole NBA championship. The Heat are hungry for that three-peat.

In the Western Conference, it’s no surprise that the San Antonio Spurs have come out on top. They have consistently put up a strong offense that has brought them multiple trips to the NBA Finals, including their loss to the Heat last year. However, there are a few other contenders that could complicate things for the Spurs. The Oklahoma City Thunder is a well-rounded team and could shake things up in the West. Not to mention the great season that the Los Angeles Clippers have had. If the Clippers can come together and play their best, they have a chance to take the conference title, but it will not be an easy task with the Spurs and Thunder ready to take their chance away from them.

The upcoming NBA playoffs are shaping up to be an interesting one! Who do you think will take home the championship this year?