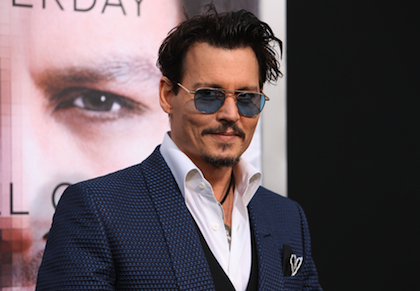 And now for something completely different.

Johnny Depp has recently announced that he will join the cast of Tusk, Kevin Smith’s latest film which follows Justin Long as he transforms into -- wait for it -- a giant walrus. No, dear readers, I did not just make that up, nor did you hallucinate that sentence. This is the actual plot of Smith’s next film. The entire film circulates around Justin Long as he is surgically made into a giant walrus man. I am not sure who in Hollywood greenlit this picture, or who read the script treatment and decried that this must be made, but I want to shake that person’s hand. Seriously, who in the world thought to make an entire film where Justin Long becomes a walrus? Evidently, Kevin Smith did, and this is why he is one of our greatest filmmakers.

Depp will join the cast as as a French-Canadian inspector by the name of Guy Lapointe, a small yet important part as he is the one who investigates Long’s transformation into a walrus. Long himself begins the film as a journalist who goes far too deep into an assignment investigating the life of an adventurer played by Michael Parks, and shortly thereafter, he becomes a walrus. Smith and SModcast co-host Scott Moiser revealed that the idea for the film came from a strange want ad they came across. The two have remained silent as to where they found this ad, much to my chagrin (but it's probably Craigslist, amirite?). I desperately want to know where in the world they found this want ad, and what the copy sounded like. Hopefully, that information will be divulged with the film.

Raise your flipper if you're as curious as I am to see Tusk!

Flashback to our chat with Justin at a GBK Gifting Suite, below!