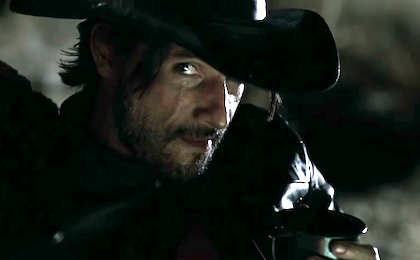 Earlier this week, HBO released the first bit of footage from their upcoming series "Westworld". Directed by Jonathan Nolan (brother and writing partner to Christopher Nolan) and produced by J.J. Abrams, "Westworld" tells the story of a futuristic theme park that is populated by robots designed to give guests 100% authentic experiences in each of its 3 "theme" sections -- Ancient Rome, Medieval (undoubtedly complete with free Pepsi refills and lack of forks), and Wild West. Two guests suddenly find their lives in danger when one of the gunslingers (the man in black played by Ed Harris) malfunctions and begins living out the dream of every theme park employee by evicting all of the guests with extreme prejudice, not to mention extreme violence. Aside from killer robots, this show also features an insanely talented cast consisting of the likes of Evan Rachel Wood, Thandie Newton, Jeffrey Wright, James Marsden, and Sir Anthony Hopkins. Peep the creepy as all hell yet beautifully fascinating teaser below.

As with any decent story about robots, the question of "what is life" is once again brought to the table for examination and dissection. Can an advanced artificial intelligence achieve consciousness as we know it? And if that consciousness is not as we know it, does it mean it should be treated any less humanely or with any less respect? If these themes are not probed thoroughly throughout the entirety of this show, then I might as well start writing about English folk singers instead of film and television from here on out.

If the title of HBO’s latest offering sounds somewhat familiar to you, then you might be a redneck. Well... not necessarily, but you could very well be an aficionado of Michael Crichton’s work or merely a fan of killer robot movies from the 1970s. That’s right, this series is actually a reimagining of a film from 1973 written and directed by Jurassic Park mastermind Michael Crichton starring Yul Brenner and a cast of the most '70s-looking people you will ever see in your life. A sequel called Futureworld was made in 1976, and that also starred Yul Brenner, but it’s predecessor tends to be the more talked about of the two. Peep the trailer for Crichton’s vision of worlds threatened by robotic destruction, and gear up for HBO’s version of it which will debut sometime in the year 2016.