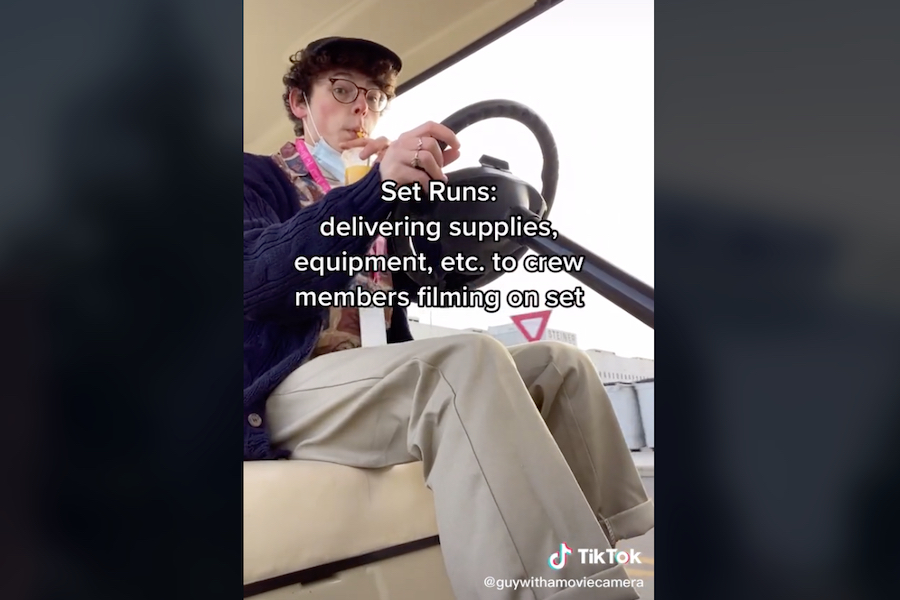 Have you ever wondered what it’s like to work in the entertainment industry? Well, thanks to Reece Feldman, we have an answer for you! Reece is a 23-year-old living in New York and is currently a production assistant on “The Marvelous Mrs. Maisel”. He has a TikTok account called @guywithamoviecamera that has 619.7k followers where he shares all the insider info about what it’s like working in the industry. Here is everything we’ve learned from him (so far)!

1. What a Production Assistant Is

"PA" is short for "production assistant", and on-set PAs have a ton of responsibilities to ensure that everything is running smoothly. Reece describes the job as quite literally assisting production. This can mean restocking the kitchen, driving the golf cart, and picking up lunch. Reece shares that his main duties happen in-office and included logging timecards, printing scripts, and answering phone calls from various departments. However, his favorite task is set runs where he delivers things to different departments and gets to see a ton of behind-the-scenes content!

@guywithamoviecamera A glimpse into my day working on #TheMarvelousMrsMaisel :) Feel free to ask TV q’s in the comments! #tv#film#movie#production♬ Aesthetic Girl - Yusei

2. What a Set Walk-Through Is

Reece doesn’t just help out in the office of “The Marvelous Mrs. Maisel” -- he gets on set too! Another task Reece shared with his followers is his daily morning walk-throughs of set. Here, he walks through to check for things like water damage, animals, and that electricity is working. We have to say, this looks a little spooky!

@guywithamoviecamera This might be the start to my very own horror/ghost movie ? #maisel#tv#film#themarvelousmrsmaisel#filmmakersoftiktok#production#movies#tvshow♬ Come Fly With Me - Frank Sinatra

3. How to Set Up for Table Reads

Another one of Reece’s responsibilities as a PA is to set up for table reads. For those who don’t know what a table read is, Reece describes them as a dress rehearsal with only the dialogue. Reece tells his followers that his job is to make sure everyone has everything they need, including pens, highlighters, and, of course, scripts.

@guywithamoviecamera If you could work on one TV show which would it be?? #themarvelousmrsmaisel#tv#film#production @amazonprimevideo ♬ You Make Me Feel So Young - Frank Sinatra

While Reece is a PA, his hustle doesn’t stop there. He is constantly doing things outside of his job to get experience in other areas of the industry. For example, he worked on the Nightmare Alley world premiere and its press day! At the premiere, Reece hopped on the carpet with a phone and a mic and was tasked with getting footage of the cast and crew arriving in order to post it on their socials! Talk about a dream job! Reece shared he tried to play it cool though around Willem Defoe, aka the Green Goblin!

@guywithamoviecamera lmk what other film/TV vids you want me to make or questions you guys have!! (also Willem Dafoe is the best Spider-Man villain?) #filmindustry#dayinmylife#letterboxd#production#nightmarealley#film#cinema#career♬ I Need A Dollar - Aloe Blacc & Aloa Blacc

5. What It’s Like to Work the Oscars Nominees Lunch

Another cool job Reece has worked is the Oscars nominees lunch! Where Andrew Garfield said hi to him by name! But it doesn’t stop there -- he also asked him how’s it going! Jealous would be an understatement! Reece was pretty excited about the interaction as well.