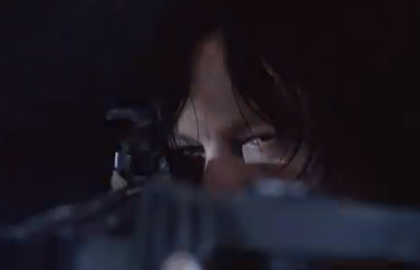 "The Walking Dead" has aired their mid-season finale for their 4th season -- I feel like it was just yesterday when they aired the Season 4 premiere! How could it be the mid-season finale already?! And now we have to wait untill February to see what happens to Rick and Carl!

The teaser trailer they gave us... yeah, well, shows nothing! Check it out for yourselves!

The writers and producers are leaving us with so many questions, but they did give us an eventful mid-season finale.

I will recap what happened as well as bring up a couple questions that I need to be answered when Season 4 resumes!

After finally falling into a group structure under the new “council”, Season 4 starts with a flu-like sickness that starts to kill members of the prison, eventually turning them into zombies without even being exposed to the flesh-eating monsters. Well, I could see how that’s pretty problematic. Not to mention that the zombies outside the fences are getting smarter. They gather in the same areas and are starting to weaken the fences.

Of course, at the peak of zombie flu infection in the prison, the fence collapses from zombie pressure, and it seems that all hope is lost. The group somehow recovers and gets the medicine they needed to help all those infected with the flu strain.

Meanwhile, Carol kills two of sick people trying to save the group from an inevitable flu plague. One of the people she killed happens to be Tyrese’s current boo thang. Man, Carol, what were you thinking?? Tyrese is upset and kills hella zombies. Rick finds out what Carol did and sends her off to fend for herself. She has to come back. She has to! She can’t just leave Daryl!

Meanwhile, this whole time, the Governor goes on his own journey where he finds solace in a family much like his own before the Apocalypse. On the road, he and his new “family” run into Martinez and his new group. Typical Governor (now also known as Brian), he kills the higher ranks, including Martinez, and takes over control of the group. He takes his new group for a showdown at the prison. Here’s where the good stuff happens...

In the mid-season finale, the Governor kills Hershel to make a point. A moment of silence, please, for the beloved father and friend, Hershel. Panic ensues and we are in the middle of a battlefield. After a lot of shooting, hand-to-hand combat, a tank, and zombie shielding, the Governor finally gets what’s coming to him and is killed in a one-two punch by Michonne and Lily. The last scene ends with Rick and Carl escaping the compound with fires and zombies destroying the prison behind them. The last words we hear from Rick is him telling Carl, “Don’t look back.”

Oh, and did I mention that WE HAVE NO IDEA WHERE JUDITH IS?! They showed us a bloody, EMPTY car seat.

Endless cliffhangers and unanswered questions basically sums up the mid-season finale of "The Walking Dead".

If you’re anything like me and you can’t wait until February, go to the Website and check out a bunch of goodies to keep yourself occupied until February.