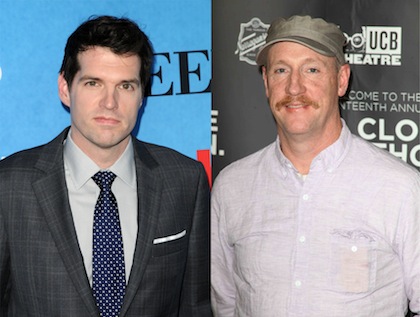 What happens when two awesomely talented comedic talents, who both happen to work on one of HBO’s funniest shows, combine their genius humor? Well, I would say Duck Soup, but they’re a few decades too late for that. Bread pudding would’ve also been a near acceptable answer, but in this case, we’re somewhat going for accuracy and, as such, will have to table all manner of imaginative results for the time being. The answer is, in fact, Red Shirts, a new an original comedy about football that has been picked up by Paramount Pictures and will be produced by Ben Stiller's production company, Red Hour Films. There is currently no synopsis for the film, but since it is about football, I have to imagine there will be copious amounts of subplots regarding passing yards, touchdowns, kidney punches, etc.

But the crux of the story here is not the upcoming football shenanigans themselves (the NFL breathes a sigh of relief) but rather the two men behind them. Matt Walsh and Timothy Simons have penned this script together, and if you’re a fan of HBO’s "Veep", then you should already know those names and your curiosity should be swelling up faster than an ACME Swelling Machine. In the world of "Veep", Walsh plays the often speechless Press Secretary for the President (spoilers: she’s President for now), and Simons plays the childish and bumbling White House liaison to the office of the Vice President. Mr. Walsh’s talents are tried and true even outside of "Veep", thanks specifically to his tenure as a member of The Upright Citizens Brigade. Mr. Simon’s work on HBO’s critically-acclaimed comedy is all the resume he really needs at this point, although he’s also done work in such feature films as Inherent Vice and Korea’s nationally treasured film The Interview (check out our Q&A with the funnyman here!).

Cameras have not yet begun rolling on what is hopefully a laugh-fest from two brilliant performers, but keep your eyes peeled to the internet (that actually sounds somewhat unhealthy) for further updates on this project!