Vanessa Hudgens Going Back to Her Musical Roots for 'Gigi' Revival 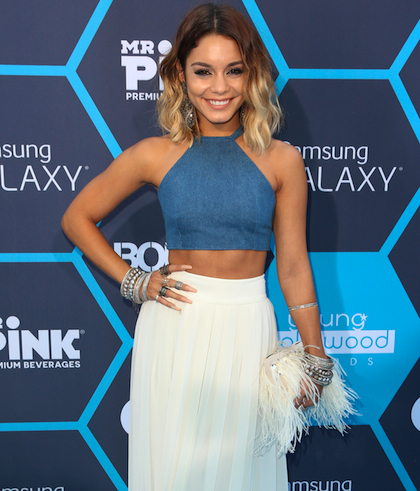 High School Musical Fans, I have great news! What an exciting day to randomly break out into song indeed!

Vanessa Hudgens has finally graduated from the High School Musical and will now star in a new adaptation of the Broadway musical, Gigi. The revival will start in Washington D.C. at the Kennedy Center on January 16, 2015, and will run through early February. Its New York dates will be released at a later time.

"I've never been so ecstatic about a project before," she told the media. "I genuinely feel like a child, beaming from ear-to-ear, being taken to Disneyland for the first time. It's something that I actually feel I was born to do."

The musical, directed by Eric Shaeffer, is a romantic comedy that was initially adapted in 1951 for Audrey Hepburn to play the title character. Gigi was first conceived as a novella by a French writer, Colette. It’s set in Paris at the turn-of-the-20th century and follows a young courtesan-in-training (Hudgens) and a wealthy man with whom she falls deeply in love.

Gigi features the memorable tunes "Thank Heaven For Little Girls", ''I Remember It Well", and "The Night They Invented Champagne", which Hudgens has called "an absolutely electric musical number." The show also includes a few songs added to the score in 1973, including "Paris is Paris Again" and "I Never Want to Go Home Again".

Hudgens’s acting career skyrocketed eight years ago after her role as Gabriella in Disney's High School Musical trilogy. She stole the hearts of young guys and gals everywhere as Troy Bolton’s (Zac Efron) love interest (on and off screen). However, it’s definitely been awhile since Hudgens has hit the stage for a live performance. Her last onstage musical was Rent in 2010, when she starred as Mimi, at the Hollywood Bowl. Since then, she has made some surprisingly diverse career choices such as her feature film, Sucker Punch and Beastly in 2011, Journey 2: The Mysterious Island and Spring Breakers in 2012, and Gimme Shelter and Frozen Ground in 2013.

I’m totally looking forward to see what Hudgens can deliver on stage! So, HSM fans, will you watch your Gabriella play Gigi?

In the meantime, check out Vanessa's visit to the YH Studio to talk about her gritty role in Frozen Ground!