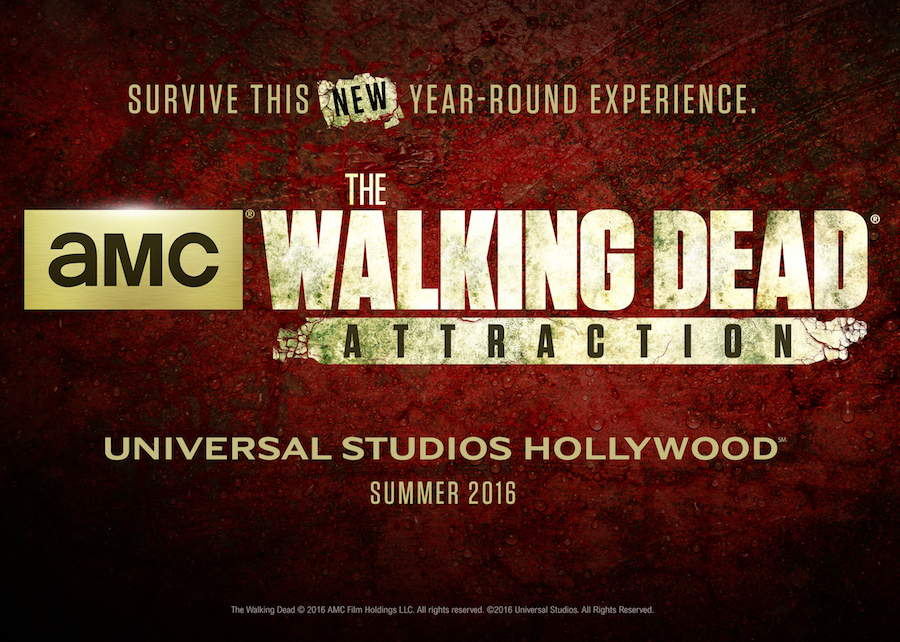 Harry Potter isn’t the only new resident moving in to Universal Studios Hollywood this year; come summer, the theme park will be swarming with witches AND zombies!

During last night’s “Talking Dead”, the recap show which follows every new episode of AMC’s “The Walking Dead”, host Chris Hardwick made the exciting announcement that fans of the series will soon be able to get their zombie fix when Universal Hollywood launches a year-round “The Walking Dead” attraction, slated to open this summer!

For those of you who like to partake in Universal’s annual Halloween Horror Nights festivities, you are probably already familiar with their “The Walking Dead” maze. Apparently, it’s such a hit that Universal is making it a permanent fixture in the park! As such, the maze will also be getting a swanky facelift, as the park is hiring TWD executive producer and director Greg Nicotero’s own special effects company, KNB Efx, to handle all the zombie make-up and prosthetics, cranking the authenticity levels up to 11! The attraction, which will be located in a new building structure near the main entrance to the park, will also feature animatronics and props tied in with the series.

Universal Studios Hollywood President Larry Kurzweil says: “’The Walking Dead’ is a phenomenon that has successfully and consistently affected the psyche of viewers on a global basis, since its debut.  We’re taking its intensity to the next level by collaborating with the show’s award-winning production team to create an authentic living representation of the series that can only be experienced at Universal Studios Hollywood.”

Check out a (very) sneak peek of the attraction in the promo vid below:

From the looks of it, it seems like a lot of the production design is going to revolve around the the hospital that Rick Grimes wakes up in in the pilot episode. Which, let’s face it, is still one of the scariest and most intense sequences of the entire series!

No specific date has been released for the opening of the attraction yet; perhaps they want to surprise us… just like Rick was!