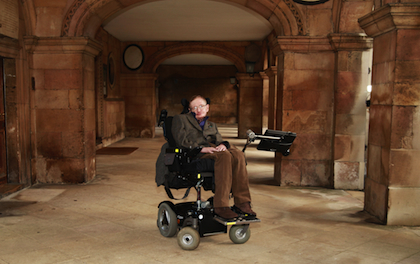 Fellow science nerds, this is a joyous time for us. Fox has blessed us by rebooting the fascinating docuseries, “Cosmos”, and we all learned how cool (and dangerous) chemistry is thanks to “Breaking Bad”. Hollywood has decided to continue the science kick with a brand new cartoon by the ultimate brainiac himself, Stephen Hawking.

The show will be an adaptation of the George Greenby children’s books, penned by Hawking himself and his daughter, Lucy. The series follows George and his companion Annie as they voyage across the Universe and learn about science. Their tour guide is the quirky Cosmos, a supercomputer with attitude. Fittingly, the Hawkings are teaming up to produce the show with the perfectly named Nerd Corps. Entertainment. The cartoon will be computer animated, and Nerd Corps. is hoping to make it a multi-platform experience, which means that kids will be able to learn even more about science! Huzzah!

Even though this series is meant for children, I, for one, plan to tune in. I’ve been a fan of Hawking for quite some time, and I already know that he makes an awesome cartoon character after his appearance on “The Simpsons” (although Hawking is not set to appear as a cartoon character on his show, though one can hope!). I learned quite a lot about chemistry from “Breaking Bad”, and I’m learning all about space thanks to “Cosmos”, so I’m excited to see all that the Hawkings will teach me. Not to mention, there’s a supercomputer with a 'tude. Who doesn’t want to watch that?

Will you be tuning in for the Hawkings' new cartoon?