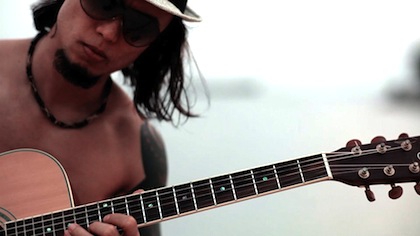 What better way for a progressive rock/pop artist to form a unique sound than by living all over the world while he does it? Ras Xix is an artist doing just that, recording in a variety of countries and relocating from Singapore to Austin, Texas, to promote his first album stateside.

His self-titled album dropped on May 1, and his musical stylings move around from genre to genre as varied as the places he has called home. Sometimes a song is acoustic, sometimes it’s electronic, and it always takes inspiration from different areas around the world.

For example, his song “Las Arenas de Cartagena” was written in Cartagena, Columbia, and it shows, with the use of a flamenco guitar and a lot of high-energy percussion via hand drums and other guitar players at his side.

“New Religion” has more of a rock vibe, and “Nora 5” slows down a bit into an easy listening jam, but again with world beats that sounds youthful and relevant. Some moments feel like they were inspired by classic rock and then the next might feel like a boy band. (In a good way.) It keeps moving and keeps offering something new.

Ras has expressed the feeling that lyrical depth and insight has been missing from the pop music industry, and he wants to put it back in through his own unique type of music. He obviously puts a very high importance in writing the lyrics of his music, and his voice is exceptionally suited to his preferred styles.

He’s unique in the sense that the switches between languages, genres, and places seem totally authentic. It’s clear that he’s creatively inspired by a wide variety of things, not simply trying to be all-encompassing for the listeners.

Ras is currently residing in Austin and is planning a tour to promote the release of his first album. Keep up with him on Facebook, Twitter, Bandcamp, and his Official Website.