TV FROM AROUND THE WORLD: "Kitchen" (Russia) 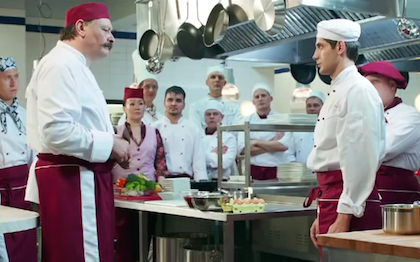 I have always had a fascination with chefs. They may partly be due to the fact that I use my own oven for storage and my cooking is limited to mostly pastas and stews. I admire the amount of talent and perspiration that it takes to become a chef, as well as the sheer tenacity to continue to be a successful chef. I am equally intrigued by chefs who seem ready to use their ovens for storage too. Why do those chefs keep on cooking?

This is one of the reasons why I enjoy the Russian comedy “Kitchen”. This oddball sitcom follows similar beats to retired U.S. sitcom “Scrubs”, except that it takes place in a restaurant’s kitchen as opposed to a hospital. The show follows enthusiastic aspiring chef and flirt, Max (Mark Bogatirev), as he goes to work in one of Moscow’s top restaurants. What he doesn’t realize, however, is that the restaurant is owned by Moscow’s most notorious gangster, Dimitry Nagiev (who is also a popular Russian actor). Max quickly learns that the restaurant’s head chef (Dimitry Nazarov) is a drunk and that he accidentally hit-and-quit-it with his new boss, Vika (Elena Podkamiskaya). Over the course of the series, Max and the rest of the staff end up in many awkward and odd situations as they run the restaurant.

The humor of "Kitchen" is certainly a bit different from that of a traditional American sitcom. In the first episode, Max makes a bet with the head chef that he can cook decent food that his customers will enjoy, and if he can’t, then he will leave the restaurant... naked. Due to Vika intercepting the food and sprinkling it with pepper (which the customer is allergic to), Max is forced to leave strip off, which, because I am 12, I found hilarious. The show moves at lightning speed and reminds me a bit of the classic British sitcom, “Fawlty Towers”, which set the bar for all farce-related sitcoms to aspire to. However, “Kitchen” also has a few more serious moments and shares with us Max’s inner monologue, thus why I was reminded of “Scrubs”. I’m curious to see if the series will become a bit more serious as it moves forward.

My favorite character thus far is certainly the Head Chef, aka Viktor. I love that he belittles his chefs, calling their food “terrible”, and the way that he tortures Max. I do believe that he has a rather soft side, as he seems to be rather kind to the restaurant’s one illegal immigrant. I do hope that he doesn’t have an epiphany and is suddenly kind -- I enjoy him as a drunken jerk.

“Kitchen” is available for streaming on Hulu.