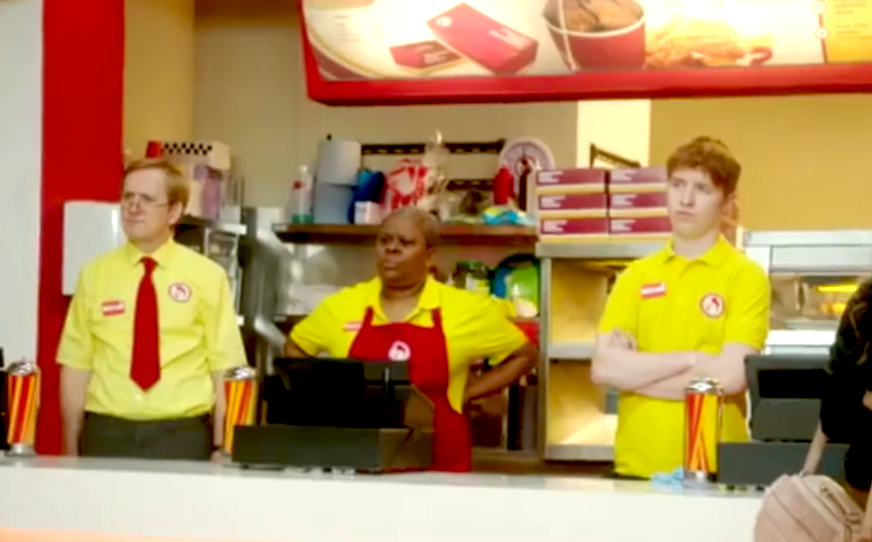 Prior to becoming a writer, my first job was at a Togo’s, which is basically a glorified version of Subway that sometimes has a Baskin Robbins attached to it. I worked at a standard Togo’s (there was no ice cream involved), and while it hasn’t been the worst job I have had, it certainly wasn’t the best. I had rather eccentric coworkers and certain customers and policies made me realize why those working in fast food tend to become rather jaded -- you constantly smell like the product you are selling and the clock moves slowly.

Since working in fast food is rather bleak, the whole industry lends itself to black comedy. British comedy is notorious for being dark, so it’s not a surprise that there is now a British comedy about working in the fast food industry. “Fried” follows the staff of a struggling fast food chain, aptly called Seriously Fried Chicken, as they attempt to navigate their restaurant and their personal lives. The show is a bit like the British version of “The Office” in humor and in tone, if “The Office” were set in a fried chicken shack. Creators Harry and Jack Williams don't shy away from awkward humor, which will either make you incredibly uncomfortable or laugh every two seconds, depending on your taste in humor (or "humour", as the case may be0.

“Fried” begins when the manager of the Croydon branch, who is a blatant drug addict who pees in the deep fryer and puts condoms into sandwiches, is finally fired. HR drone Mary (Katy Wix) is forced by her boss (who never shows any emotion -- think Captain Holt from “Brooklyn 99”) to manage it. Mary may be one of my favorite characters, as she constantly discusses her pathetic life in a chirper manner. Here is my favorite Mary line:

“I bet you didn’t know that after Gareth left I wore his underpants for a month and cried myself to sleep every night!”

Surprisingly, Mary isn’t even the weirdest worker at the Croydon branch of Seriously Fried Chicken. That honor (or honour) goes to Derek Wom (Matthew Cottle), the assistant to the manager. Derek is the dictionary definition of the word “creepy” -- he greets his co-workers by crying “Good Morning, little chicks and cocks!”, and as he massages Mary’s back, he notes “This back of yours is tense; more knots than you would find in a bondage club, I imagine.” Derek’s one-liners are so disturbing that I couldn’t help but laugh at them, and I kept wanting to see what inappropriate thing he would do next.

The show does have a more traditional sitcom plot between nerdy Joe (William Melling) and Amara (Mandeep Dhillon). Joe clearly has a crush on Amara, and no matter what he does, she shows absolutely no interest in him. While I found this plotline to be amusing, it isn’t nearly as fun or original as the interactions between Mary and Derek, or even Mary and Shontal (Lorna Gayle), a worker who has lost all motivation for her job.

If you enjoy awkward humor and strange workplace situations, then you will adore “Fried”. As of right now, there is only one 6-episode season of the show (available on Netflix), but hopefully a second season will be released soon!