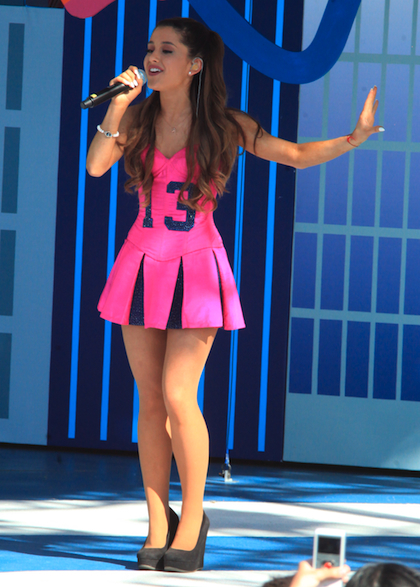 We’ve said it before, and we’re proud to say it again: Ariana Grande is made of pure talent. With her angelic yet super soulful vocals, her five-octave range, and whistle tones that are reminiscent of a young, early-'90s Mariah Carey, Grande is a sure thing when it comes to who will be defined as the voice of this new generation of artists.

Her debut album, Yours Truly, has been out for a little while now (and charted at #1 on Billboard), and we here at Young Hollywood are still absolutely gushing over it and how freakin’ good it is. With production from the likes of the legendary Kenny “Babyface” Edmonds (seriously, what other twenty-something gets to say they’ve worked with Babyface?!?), was it even a question of how amazing this record would be?

Let’s take a track-by-track look at what exactly makes Yours Truly an album worthy of great applause and accolades.

When you first pop the album into your stereo, the chill-inducing beginning of “Honeymoon Avenue” is rather reminiscent to that of the beginning of Justin Timberlake’s “Pusher Love Girl”, and that is definitely a good thing. A sweet ode to young love and how good it makes you feel, this track is the perfect doo-woping introduction to Ariana’s sound.

The second single, “Baby I”, shares a common theme of many of Ariana’s songs: young love. But that’s not to say that all the songs sound the same, because that is not the case at all, especially with Grande’s vocal range. “Baby I”, bubbly laughs and all, is a perfect tribute to all that makes young love great, and the flawless video gives us all sorts of life. “All I’m tryin’ to say is you’re my everything…”

Undoubtedly one of, if not the best songs on the record, “Right There” features two amazing rap hooks from Big Sean, whom Ariana is a huge fan of, and an amazing throwback sample of Lil’ Kim’s 1996 hit “Crush On You”. Who would have thought a classic rap song could be reinvented to make a new modern pop hit?! Fave line: “Lost in your eyes, and I lose all track of time…”

It’s safe to say Ariana, besides being a '90s R&B admirer, also loved the '50s. It’s evident in “Tattooed Heart”, which sounds like it should be playing in a soda shop as people twil about in poodle skirts and leather jackets.

Another personal favorite, mainly because the flow of lyrics is so cool, is “Lovin’ It”, which could definitely hold its own as a single. Her good friend from Victorious, Leon Thomas, had his own hand in writing this song (as well as others on the album) and crafting this perfect fusion of hip-hop beats/instrumentals with Ariana’s smooth vocals. Fave line: “You give me chills, every time we chill…”

One of the songs of the season this past summer, who wasn’t singing along to Ariana as she belted lyrics such as “I love the way you make me feel” and “you give me that kind of something, want it all the time, need it every day”? And, let’s not forget good friend Mac Miller’s verses, lending a hip edge to the song, making for the perfect chemistry of rapper-meets-soulful songstress. Admit it, you thought this was a Mariah jam the first time you heard it...

Ariana revealed on Twitter recently that “You’ll Never Know” was supposed to be a female-empowerment anthem with Demi Lovato reminiscent to that of Brandy and Monica’s 1998 smash hit “The Boy Is Mine”, and although the duet between two of today’s biggest pop star’s unfortunately didn’t come to fruition, it does not make the song any less empowering for girls just getting over a breakup. Fave line: “Don’t be mad at me because you’re being replaced, know your place…”

The most soulful song on the entire album, and the one that best showcases Ariana’s vocal depth, “Almost Is Never Enough” features Grande’s bf Nathan Sykes of The Wanted, and was also featured on the soundtrack for the summer movie The Mortal Instruments. There is no denying these two and their vocal chemistry, and this song, although sad in nature, is smooth as butter and simply irresistible. Fave line: Sooner or later, we’ll wonder why we gave up / The truth is, everyone knows…”

Kind of an oddball to include on Yours Truly, especially since most of the album has an R&B twang to it, the very bubblegum “Popular Song” features British singer Mika and tells a story of bullied youth that are now popular, cool, and successful in the face of their old-time adversaries. All in a light, catchy way of course. Fave line: “You dunked me in the toilets / Now it’s you that cleans them…”

It seems as though Ariana meant to delegate her two pop-iest tracks to the end of the album, seeing as though the last track, “Better Left Unsaid”, is dance hit that you’d love to hear in any club, but still be left wondering what it’s doing on Yours Truly. Still, it’s a good way to wrap up what is an impressive debut album.

Yours Truly legitimatizes Ariana Grande as the true star she is, making for an amazing transition from Nickelodeon child star to music powerhouse, and this is surely not the last we’ll be hearing from Miss Grande.