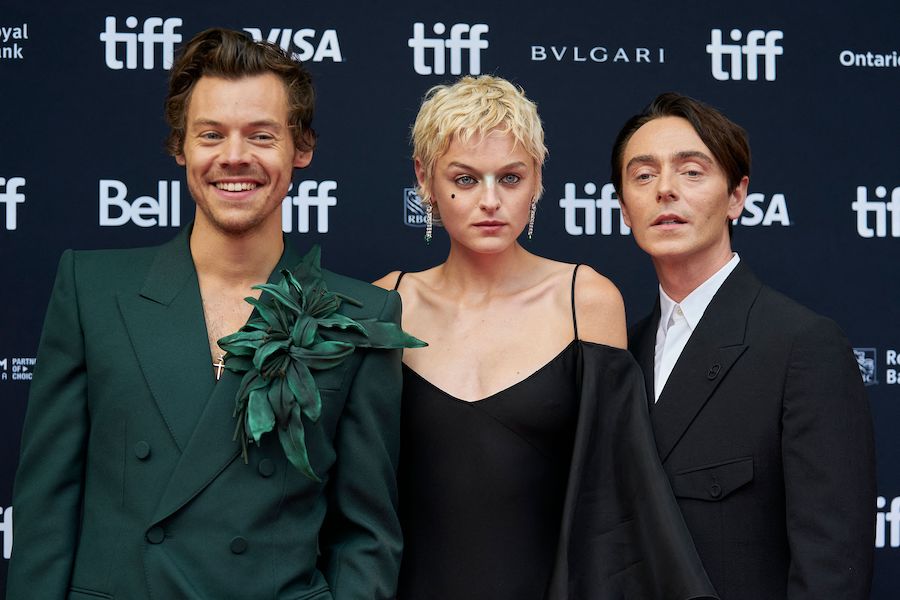 The Toronto International Film Festival concluded this past Sunday, leaving us with no shortage of great memories to look back on. The fashion, the premieres, and the good times – let’s take a look!

TIFF saw the premiere of My Policeman (dir. Michael Grandage) starring Harry Styles, Emma Corrin, and David Dawson. Styles plays Tom, a young policeman who falls in love with a schoolteacher (Dawson) during the 1950s. The three cast members showcased their acting chops as well as their style on the red carpet.

Emma Corrin at the World Premiere of MY POLICEMAN. #TIFF22

Harry, Emma, and David on the red carpet of the Toronto International Film Festival. #TIFF22pic.twitter.com/bwQhuDgjRL

Also premiering at TIFF this year was the long-awaited and star-studded sequel to Rian Johnson's 2019 hit mystery Knives Out, Glass Onion, which had many lucky viewers proclaiming it to be even better than the first one! We'll be able to find out for ourselves when it hits Netflix on December 23.

Viola Davis also stunned in a bright orange and pink gown for the world premiere of her film The Woman King (dir. Gina Prince-Bythewood). Davis takes on the role of general to the Agojie, a unit of women warriors charged with protecting the Dahomey kingdom in West Africa during the 17-19th centuries. Fellow cast members include John Boyega, Hero Fiennes Tiffin, Lashana Lynch, and Thuso Mbedu.

Thank you to our wonderful cast, director, and producers, as well as family and friends, for showing up and showing out at @TIFF_NET! ❤ pic.twitter.com/2ga4CTQZeg

Thank you ALL for making @WomanKingMovie the #1 Movie in America!!! ?? #TheWomanKingpic.twitter.com/uQwsLtztFD

Taking home the award for People’s Choice was The Fabelmans, directed by the legendary Steven Spielberg. The film is taken from Spielberg’s early life in a loosely autobiographical style and through the fictional character of Sammy Fabelman (Gabe LaBelle). Paul Dano and Michelle Williams appear as Sammy’s parents, along with Seth Rogan, David Lynch, and Julia Butters.

A slew of other glamorous outfits blessed the red carpet as more celebrities made an appearance. Joe Jonas and Sophie Turner attended the showing of Devotion, in which Joe plays Marty Goode alongside Glen Powell as Tom Hudner and the heroic first black aviation pilot, Jesse Brown (Jonathan Majors).

Taylor Swift dripped in gold while Sadie Sink donned a red suit for the special “In Conversation with Taylor Swift” panel. There, Swift shared behind-the-scenes details about creating the short film for her music video “All Too Well (Taylor’s Version)”.

Taylor Swift and Sadie Sink pose on the red carpet at #TIFF22. Swift will appear in conversation with TIFF CEO Cameron Bailey and screen her short film "All Too Well" on 35mm.https://t.co/FtiMq4Ohh4pic.twitter.com/Lg26tfhE4W

Of course, amongst the glitz and the glam, there was still room for a little chaos. Anna Kendrick shared the hilarious moment on Twitter when she got trapped in an elevator!

Ah, the classic “I’m behind schedule at this film festival because I had to be rescued from an elevator” excuse #TIFF22pic.twitter.com/0tfaBVDOoN

On the heartwarming side of things. Brendan Fraser received the TIFF Tribute Award for Best Actor for his performance in Darren Aronofsky’s The Whale. Here’s a clip of Fraser’s speech. Come on! Look at that smile!

Brendan Fraser accepting an award for his performance in ‘The Whale’ at the #TIFF22 Tribute Awards. pic.twitter.com/XJXwzAlc8P