Warner Bros. Going Back to the Future with Reboot of "The Jetsons"! 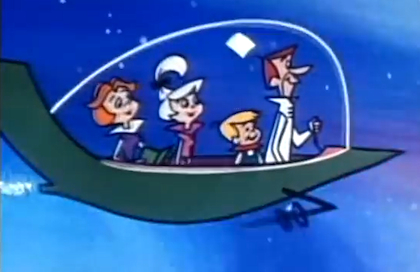 In case you were too young to have known about “The Jetsons”, it was a Hanna-Barbera cartoon series from the early-'60s which took place in the future when everybody thought we would live in buildings high above the sky and would drive flying cars -- AKA what everyone considered 2001 was going to be. (We have computers in our hands now that we can make phones calls with, so maybe they got something right.) The Jetsons are also a family, with father George, mother Jane, daughter Judy, and son Elroy. Warner Bros. has decided to bring back “The Jetsons” for the new generation that Hanna-Barbera thought would be living in this future, in the form of an animated feature film.

If this sounds oddly familiar to you, it would be because Warner Bros. had spoke about transforming this film into a live-action feature way back in the far off past of 2012. Somewhere along the lines, WB decided that live-action wasn’t the right market and decided to bring The Jetsons back to their animated roots. The switch could be because WB has realized that cartoons are where it’s at. I mean, I won’t lie, I marathon “Adventure Time” and everything I can find for free on the YouTube channel Cartoon Hangover, like “Bravest Warriors” and “Bee and Puppycat” (trust me, just check them out). Even Seth Rogen is taking his stab at a cartoon feature film with the adult-oriented film Sausage Party, due out in June 2016.

As you can tell by me gushing over all of the cartoon things I’m into, I’m definitely excited about what I hope will be a Hanna-Barbera-style animated film. Hanna-Barbera was also responsible for “Where Are You, Scooby-Doo?”, which is one of my favorite THINGS of all time (not just a show, because Scooby-Doo is a mindset, y’all), and Scooby-Doo on Zombie Islandis easily in my Top Ten favorite movies of all time. But the main thing that I’m excited to see is if they bring up the conspiracy theory that another Hanna-Barbera favorite, “The Flintstones”, is linked to “The Jetsons”.

In a movie called The Jetsons Meet the Flintstones, the son of the Jetsons, Elroy, invents a time machine. The machine malfunctions, as the Jetsons originally intended to go into the future, but it sends them to the past instead. What some fans have surmised is, what if the machine actually didn't malfunction? What if the Jetsons actually traveled into the future and met the Flintstones? This means that the Flintstones live in a post-apocalyptic future where they enslave animals to replace the electric comforts, such as TV, sinks, and alarm clocks, that their forefathers once enjoyed. They even pedal cars with their feet…

Okay, I know, it’s a cartoon show, but still, it’s curious. The Flintstones live on the ground, and the Jetsons live in the sky. They could be living up there for the reason that the planet is rebuilding itself below them after some sort of planet-damaging war, or because of that global warming stuff Al Gore is always complaining about. There’s also a chance that Elroy actually invented a transportation device and the Jetsons merely landed on the Earth and the Flintstones live simultaneously with the Jetsons. This doesn’t entirely rule out the post-apocalyptic world theory either. If you think about it, there is a possibility of this since the Jetsons live in a world of highly-advanced digital technology, and the Flintstones live with, well, bird beaks used as record player needles. It could be as simple that there is no communication between the groups, so neither society knows what the other is up to.

Crazy cartoon conspiracies asid,e this should be a fun movie. WB has commissioned screenwriter Matt Lieberman to write it, while he is also writing the Short Circuit reboot, so he sounds like the man for the job. Now that you got all the information, check out the opening theme to “The Jetsons”, which you probably have heard at a friend's Bar Mitzvah when you were 12 or 13: