The True (Darker) Themes of "A Charlie Brown Christmas"! 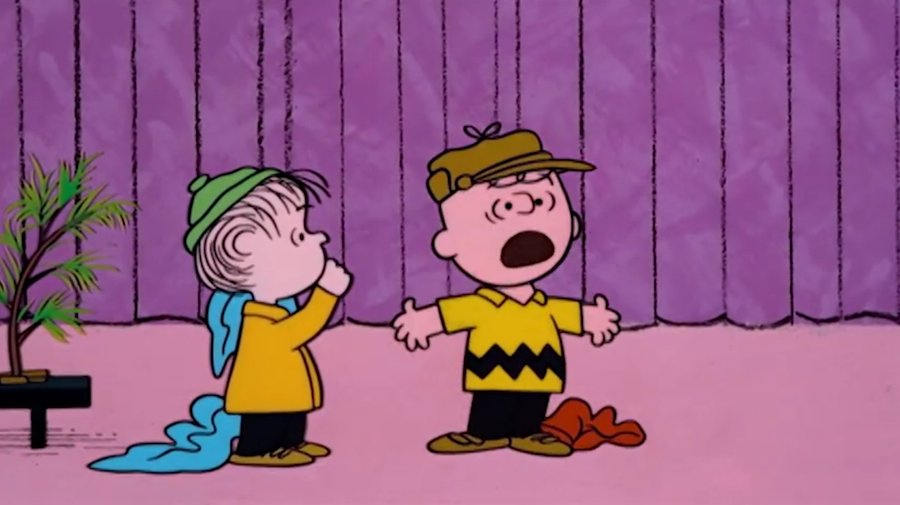 Throughout most of his life, Charles M. Schulz was a cartoonist for the newspaper section called “The Funnies”, and his most prized creation was a questionably pre-maturely bald young boy named Charlie Brown. Since the comic strip took off, the character and his mostly abusive classmates/friends influenced many works to come and leaped off the page a few times onto the screen, big and small. Since 1965 (that’s older than my mom), Charlie Brown has become a Christmas staple with his TV special “A Charlie Brown Christmas”, but like most Charlie Brown-related things there’s a dark undertone lost in the brightly lit haze of Christmas...

“A Charlie Brown Christmas” is what many people would expect to come from Charlie Brown and the Peanuts gang. The kids have to put on a school Christmas play involving the nativity scene, and none other then the town idiot and local pariah Charlie Brown volunteers to direct the play. This all comes about because Charlie is depressed about the over-commercialization of the holiday and his own inability to understand the meaning of Christmas, so he figures the best thing for him to do is direct a play about the meaning of Christmas. When the play gets into full swing, it’s business as usual as none of the kids, except for Charlie’s friend Linus (who needs to walk around with blanket everywhere in fear of horrible things happening to him at every corner -- not the most stable of people to be best friends with), show any respect for Charlie as they have dance parties and call him names.

Things only get worse when Charlie’s biggest bully (and Linus’s older sister) Lucy takes control of the situation and demands that Charlie gets them an aluminum Christmas tree. Charlie is not thrilled by this plan, and who could blame him? For how much of this special Charlie spends moping around about how Christmas has lost its way and has no meaning, he does have a point that nothing about an aluminum tree is very Christmas-y. What do you think the three wise man would’ve done if they happened upon an aluminum tree? They would’ve sawed it into a bunch of pieces, given baby Jesus part of the cut, and then ran off with the rest because they can only assume it’s some sort of futuristic, alien metal back then worth at least $500,000 Jerusalem dollars. Nonetheless, Charlie sets off to get the tree, but when he gets to this seemingly abandoned tree lot, he finds the weakest, wimpiest tree that may very well be completely dead.

Seeing this tree as a great purchase, Charlie brings it back to the kids and the play where all of the children tear him a new one. I mean, sure, Charlie is a Debbie Bowner (a Charlie Browner Downer?), and the kids got something they weren’t expecting, and it was an easy enough task for Charlie to pull off, but he couldn’t even do that… But Charlie Brown is a man who sticks by his principles and does the right thing. To him, this tiny, frail tree is Christmas, but it’s not until Linus comes in and kidsplains the religious meaning of Christmas (it was the '60s, people could do that back then) that the kids get it. They even fix up the tree with decorations and, through what I can only assume is dark magic, bring the tree back to life. !yrreM samtsirhC

If you think I sound sarcastic or overly critical of this Christmas special, then you’re wrong. I love this and most things dealing with Charlie Brown. There’s just a lot of dark stuff in Charlie Brown that a lot of people seem to overlook. He’s really the first mainstream character to battle a mental illness like depression on a regular basis, and I don’t know if Schulz was trying to tell us something by having his therapist also be his bully, but there’s a lot more to Charlie Brown and Peanuts then people give it credit for.

Lastly, I would like to talk about the soundtrack, and one song in particular. This special and this song have been referenced frequently throughout the years, including most memorably (at least to me) on “Arrested Development”. The song itself, however, by Vince Guaraldi, is a great Christmas tune. So many times throughout the history of music, we've been presented with upbeat-sounding music containing largely depressing lyrics. One of The Smashing Pumpkins's biggest hits, “Today”, has always sounded upbeat to a lot of people because they sing “Today is the greatest day I’ve ever known”, and other lyrics praising what a great day it is, but underneath all those trimmings is a slice of sick, twisted visuals of people tearing their own eyes out. Guaraldi flipped the script with this Christmas tune and took some of the cheeriest sounding lyrics and put them in a super depressing backdrop helmed by a sad sounding choir of kids. Enjoy!