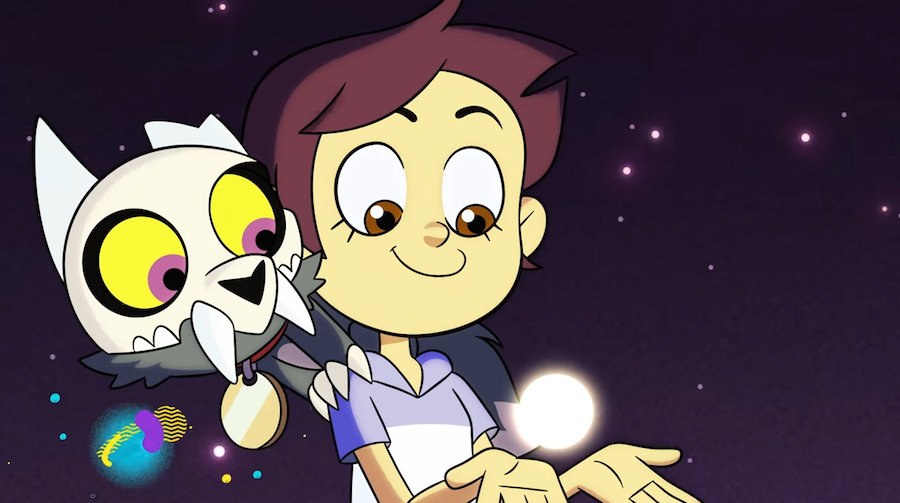 Back in January of 2020, "The Owl House" premiered on Disney Channel. The show is an animated fantasy television series created by Dana Terrace and stars Sarah-Nicole Robles as Luz, Wendie Malick as Eda, and Alex Hirsch as King. The show follows Luz, a 14-year-old Dominican-American girl headed for Reality Check Camp, a juvenile detention summer camp, but instead, she stumbles upon a portal to a magical realm. Once there, she meets a rebellious witch named Eda and her tiny warrior roommate King. In this magical realm, Luz finds family in an unlikely place and also chases her dreams of becoming a witch, even though she has no inherent magical powers, by serving as Eda’s apprentice.

Throughout the series so far, Luz has shown interest in male characters, but following the 2 most recent episodes and an announcement from the series creator Dana Terrace, Disney has confirmed that 14-year-old Luz Noceda is the first bisexual lead character to appear on the network. Terrace herself identifies as bisexual and tweeted, “I'm bi! I want to write a bi character! Luckily my stubbornness paid off and now I am VERY supported by current Disney leadership. (Thank you @NashRiskin and team!) Not to mention the amazingness of this crew.”

I'm bi! I want to write a bi character, dammit! Luckily my stubbornness paid off and now I am VERY supported by current Disney leadership. (Thank you @NashRiskin and team!) Not to mention the amazingness of this crew.

Throughout the episodes “Enchanting Grom Fright” and “Wing It Like Witches”, viewers can see the relationship between Luz and the female character Amity Blight begin to grow. Amity is voiced by Mae Whitman and is a major supporting character on "The Owl House". Amity is one of the top witches at Hexside Academy of Magic and Demons, and throughout the show, her character seemed to always be at odds with Luz. However, as the show progresses, Amity’s feelings for Luz continue to get stronger and it is revealed to viewers that Amity wanted to ask Luz to Hexside’s version of prom. The two end up going to prom together and sharing a dance under the moonlight!

While "The Owl House" is not the first Disney Channel piece to feature an LGBTQ+ character, it is the first to portray a bisexual lead character. With minor roles in shows and movies such as Onward, "Andi Mack", "Good Luck Charlie", and "High School Musical: The Musical -- The Series", LGBTQ+ voices and characters were finally being developed and heard on the network. Now, with a lead character representing the LGBTQ+ community, many viewers and fans are finally able to see themselves portrayed on television.

The end of the first season of "The Owl House" is rapidly approaching, but no need to worry, the show has already been renewed for a second season! You can catch the final episode of "The Owl House" on Disney Channel this Saturday, August 28th. As Season 1 comes to a close and Season 2 begins to come together, we are excited and hopeful to see more of this blooming relationship between Luz and Amity!