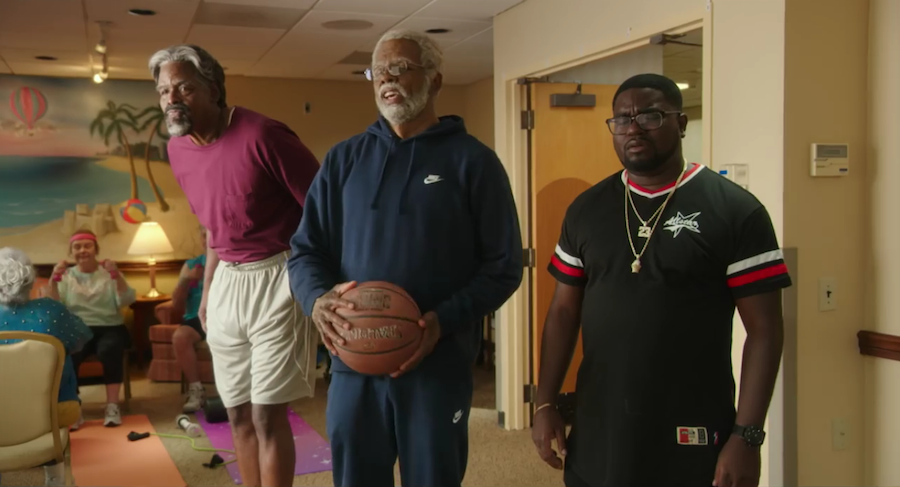 Recently, we were graced with a movie trailer called Uncle Drew, and many were left with many burning questions, the most important one being: Who is this Uncle Drew??

NBA player Kyrie Irving stars in this sports comedy as Uncle Drew, a former basketball legend who is approached by a street basketball team manager played by everyone's favorite TSA agent from Get Out, Lil Rey Howery, to join a street ball tournament. Uncle Drew enlists his team of fellow veteran players.

Uncle Drew was originally a character created for a Pepsi commercial in 2012. Kyrie Irving costumed up as Uncle Drew and this happened:

This crazy concept carried on through 3 more chapters written by Kyrie himself, as well as a few other Uncle Drew videos. Chapter 2 even brought out fellow (at the time) Cavalier, Kevin Love:

Yes, that was THE Bill Russell giving Uncle Drew his props.

In Chapter 3, Uncle Drew recruits his old point guard, "Lights", to show these young bloods how to get buckets:

Nate Robinson plays "Lights" and WNBA star Maya Moore plays his wife Betty Lou, who shows them that boys ain't the only ones who can throw down on the court.

Uncle Drew comes back for an insane game of H.O.R.S.E. against Walt, played by Ray Allen:

We even got some colorful commentary from Angelo and Louis, AKA. Baron Davis and J.B. Smoove.

The reception for Uncle Drew was amazing and he took us all by storm, and it was only a matter of time before a movie based on this character came about. As you saw in the trailer for the film, Kyrie will be joined by a few other famous sports stars like Reggie Miller, Chris Webber, Nate Robinson, Lisa Leslie, and the one and only Shaquille O'Neal.