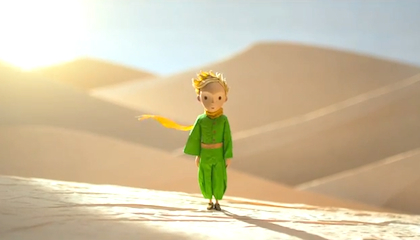 Just a few days ago, the 68th Cannes Film Festival announced its official lineup, and there are some truly exciting films in the bunch! Mixed in with your standard fare -- the obilgatory Woody Allen film (Irrational Man) and a big-budget blockbuster (Mad Max: Fury Road, which you know will be delightfully insane) -- are a number of more unusual films, including the festival opener, a French drama titled La Tête Haute. Directed by Emmanuelle Bercot, the film is a bit more somber and socially-conscious than previous films (last year opened with Grace of Monaco) ,but it’s not the only unique film to make its debut this year. Here are my picks for the best looking films of the 2015 Cannes Film Festival!

Macbeth:  Something wicked this way comes at this year’s Cannes, where director Justin Kurzel’s version of the classic Shakespearean tragedy makes itself known. Kurzel’s film stars two incredible actors as Macbeth and Lady Macbeth: Michael Fassbender and Marion Cotillard. The film also boasts David Thewlis and Jack Reynor in the cast (as Duncan and Malcolm, respectively). I have always been a fan of Macbeth -- it has witches, treason, betrayal, and lots of people going mad; what more could you want in a play? -- but I am particularly excited to see this version of it. It takes a specific type of acting to pull of the sheer madness of Macbeth and Lady Macbeth, and judging from their previous performances, Cotillard and Fassbender are the perfect pairing for the role.

Inside Out:  I’m a sucker for a Pixar film (I still believe that WALL-E is the ideal date movie), and it’s been two years since a Pixar film last hit theaters. It’s nice to see Pixar return to their creative roots with Inside Out (while the sequels are fun, their creativity really shines through in their original films), and Inside Out appears to be particularly innovative. The film focuses on Riley, a young girl who is struggling to adjust to her new life in San Francisco. However, the film’s main star isn’t Riley -- it’s her five emotions Joy (Amy Poehler), Anger (Lewis Black), Fear (Bill Hader), Sadness (Phyllis Smith), and Disgust (Mindy Kaling), all of whom try their best to help her through her everyday life. Turmoil ensues when Joy and Sadness get lost in the rest of Riley’s mind. Inside Out is certainly not a conventional film, but none of Pixar’s films have been -- and that’s what makes them uniquely Pixar.

Carol:  Director Todd Haynes (Far from Heaven) is back with another melodramatic piece, this time set during the conservative 1950s. Rooney Mara stars as a store clerk who falls for an older woman (played by Cate Blanchett), but there's a caveat: Blanchett’s character is already married (to Kyle Chandler). As if their relationship weren't tricky enough!. The film has already garnered praise from critics for the two actresses performances. I smell Oscar bait…

The Assassin:  Here’s one for all of you out there who love a good kung-fu film: The Assassin follows a group of assassins during the Tang Dynasty period. Starring Shu Qi and Chang Chen, the film has earned a bit of attention as it is directed by Hou Hsiao-Hsien, his first film in seven years. Hsiao-Hsien has already directed a number of films, four of which appear on the 100 Greatest Chinese Films of the 20th Century list (nbd). If you’re looking for some booty-kicking, than wait until The Assassin hits theaters.

The Little Prince:  The director of Kung Fu Panda is back with a new animated film that is slightly different from everyone’s favorite panda. Mark Osborne’s version of The Little Prince, based on the French novel by Antoine de Saint-Exupery, blends animation in a far more creative way than he has done in the past, and tackles a more serious subject. Osborne’s version doesn’t exactly follow the book -- the parts of the film that do follow the little prince’s story were all shot in stop-motion, while the additional plot were all shot in computer-animation. The original The Little Prince follows a pilot after he crash-lands his plane and meets a visitor from a distant planet. That portion of the story is still in the film, but there will also be a story focused on a young child prodigy who bonds with her next door neighbor, an eccentric aviator. I am intrigued by the split animation techniques and this new take on the classic tale, both of which look quite promising: