"The Bachelor" Recap, Episode 10: The Women Tell All & Dish It OUT! 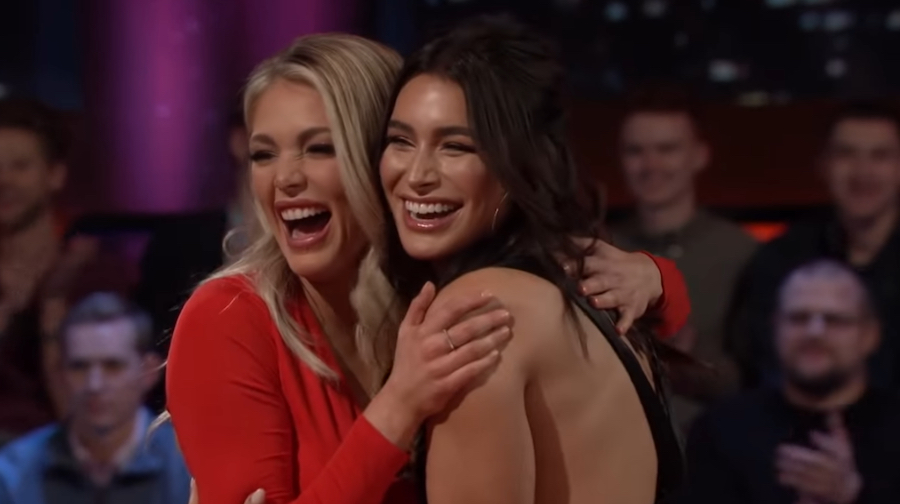 Alright, Bachelor Nation fam, let’s start out by cheers-ing to ourselves for making it this far with Peter and the girls. It has been one LONG and very wild ride.

Last night’s episode (#10) was the Women Tell All! We also saw the last rose ceremony before the finale (which is next week!) and, as usual, it was v dramatic.

You know the drill – here are the stand-out moments!

As a quick refresher for those who aren’t caught up – last week, Madison walked away after Peter confessed he had been intimate with other women. We didn’t know if she was gone for good or just needed a breather.

Last night opened with Hannah Ann and Victoria F. getting ready for the rose ceremony, and they were standing out there alone. They were wondering where Madison was and what was going on, because Peter seemed distant and distraught.

Suddenly, Madison walks out and looked SO GOOD in an all red dress. Peter seemed relieved and started the rose ceremony. He chose Hannah Ann and Madison, letting Victoria F. go.

However, this moment was the most dramatic because he said the famous line “Wll you accept this rose?” and Madison paused – she quietly answers “yes” and Peter responds with “you sure?” Madison says yes again, and the three of them are left to cheers-ing with champagne – Hannah Ann doesn’t know what a poker face is (LOL, love her) and you can FEEL the awkwardness through the screen.

Let me start off by saying that I’m sure Tammy is a great person outside of the show. The show ALWAYS gets people in their emotions, and I can’t imagine being cool, calm, and collected all of the time. This moment goes to Tammy for going afterKelsey in the Women Tell All. She then goes for the other girls and it’s hard to watch.

Unfortunately there isn’t an official clip, but fortunately I found this one which does the job:

This moment goes to former Bachelorette Rachel Lindsay making an appearance on the Women Tell All. She addresses online hate and harassment by reading messages that were received by the girls of this season.

She struggles to make it through the messages, and the girls react with extreme sadness and vulnerability. I loved this moment because hate and threats are NEVER okay, and it’s amazing that this show with such a big platform addressed it.

This moment goes to Victoria F. You might be surprised that she takes this moment given her history on the show, but she really impressed Bachelor Nation last night.

She was called up to sit in the hot seat next to Chris Harrison, where he asked her a series of personal questions, like if she actually broke up marriages, etc. She seemed nervous but not defensive at ALL, which is where viewers were in shock. She reflected on the season and said she’s learned a lot about herself and relationships and ultimately thanks Peter for being so patient with her.

We knew from the beginning she wasn’t the most secure because of her past, and in this moment she seemed to have really turned a leaf. You deserve love just as much as anyone else, Victoria F.! Yes, girl.

P.S. sorry guys, there isn’t a clip of this either (looking at you, "The Bachelor"), but trust, it was an amazing moment.

Aww who remembers Ashley I., our crying queen?!

Kelsey clearly hasn’t learned her lesson, though, because towards the end of the clip, she rocks the bottle like a baby and you hear Chris saying “DON’T SHAKE IT!”

What was your favorite moment of Episode 10?!