'The Babadook' Serves Up Some Holiday Scares! 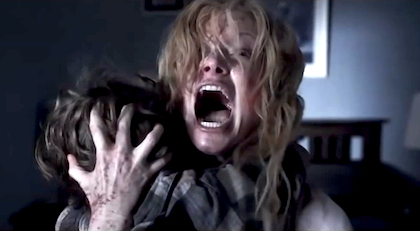 Oh this is a wonderful time of year indeed. The stockings are hung by the chimney with care in hopes that a man who has made home invasion into a cult following will soon be there. In all seriousness, though, I love Christmas and its sister holidays, as they have a habit of putting people in slightly better moods than they are normally in during the other 11 months of the year. But amongst this bright and wonderful holiday cheer, something terrifying has crept into the hearts of critics and film audiences alike. No, I am not talking about a re-release of Jingle All the Way. I’m talking about the first-rate horror film known as The Babadook.

For those of you playing the home game, you’ll know that I often refer to the horror genre as “the little genre that could”, because creepy films about things that go bump in the night are not normally seen in much of a respectful light. There’s reason enough for this, though, due to the fact that there are not many good ones being made these days. Oftentimes we have had to look to our neighbors on this swiftly tilting planet to provide the real scares, and this time around, it is the land of Australia and a wonderful writer/director named Jennifer Kent that have saved the day with a uniquely terrifying and heartbreaking tale.

The Babadook tells the story of Amelia, a widowed single mother who is trying to raise her 6-year-old son Noah to the best of her abilities, although the task is harder than normal, as Noah won’t let Amelia get much sleep these nights due to his overwhelming fear of a monster in his room. The monster is eventually given a name after Amelia reads to Noah from a strange book called Mister Babadook. However, identifying his adversary does little to calm Noah’s already jangled nerves, as he continues to see The Babadook on a daily basis while, of course, nobody else can. Amelia is becoming more desperate and slightly more unhinged than normal as she tries to figure out how best to help her terrified son, who has made it clear that he will do anything to protect his mother from The Babadook. But mainly she just wants to sleep. Getting her husband back would be wonderful as well, but for the most part, she would be content if her body and soul were allowed some time to come to rest. And yet sleep, or any form of peace, is not in the cards for her as she herself begins to see The Babadook, and unfortunately that might just spell doom for them all...

After making an impressive debut at the Sundance Film Festival, The Babadook began to slowly amass a very favorable following in the critical community. As such, it is currently sitting at 98% on rottentomatoes.com, making it one of the best-reviewed movies of the year. You’ll also find The Babadook popping up on a good many Top 10 lists as well. This is incredibly appropriate, at least to me, because this is not only one of the best movies I have seen this year, but easily one of the best horror films I have ever seen, period. To start with, it’s minimalistic approach is refreshing because it keeps the scares from going stale by showing too much, and yet it doesn’t enter into the realm of laziness by leaving everything to the imagination either. Instead, the film concentrates on building a dreadful atmosphere while placing importance on the OUTCOME of certain moments rather than the moments themselves. In the end, it is not just the horror itself we are interested in but how that horror affects our characters and how they ultimately deal with it.

What we do see of The Babadook is frightening, and much of that fear comes from our complete lack of understanding of it. Nobody knows, including the characters in the movie, where exactly this thing came from. It deftly avoids many horror film cliches, including the very tired one of the protagonist seeking out the wise figure (a priest, a rabbi, and a professor walk into a bar and explain a plot...) that conveniently knows just what the heck is going on and possibly how to stop it as well. No, this horror comes from out of nowhere, and the mother is in no way equipped to handle it by any stretch of the imagination. Hell, she’s not even a very good mother at the start of the film. And that is another trope that is avoided and something else that really sets this film above the rest.

Amelia, played brilliantly by Essie Davis, is completely racked with grief due to the loss of her husband, which occurred while he was taking her to the hospital to give birth to her son. Yes, Noah’s birthday is also the anniversary of the death of Amelia’s true love. I don’t think there is any question in regards to whether or not she loves her son, but she is not giving herself permission to fully embrace the love he has for her, because somewhere in her heart, she feels that she is not supposed to be happy. She is a fairly weak character at the beginning who even goes as far as to use her son as an excuse for her own shortcomings. The Strong Female Lead Who Will Stop At Nothing To Defend Her Loved Ones is a fairly common archetype nowadays, and while that is not necessarily a bad thing, it is nice to see a protagonist really have to search within themselves to find the courage to do what is necessary, as opposed to starting their journey immediately from a strong place. I’ll tell you right now that there are two monsters in this movie. The Babadook is certainly one of them, but the other monster is the seemingly unending grieving process that can threaten to take over your whole life if nothing is done about it.

The Babadook is a movie that fully recognizes the humanity of its characters and really allows for it to wash over the audience. Nothing in this film is done merely halfway, and every aspect of it, including the horror, the sadness, the love, and even the absurdity (the bits of black comedy in this are genius), are all important factors in an unsettling journey told to us by a supremely confident and supremely talented filmmaker.