The 5 Most Promising Films of the Venice Film Festival 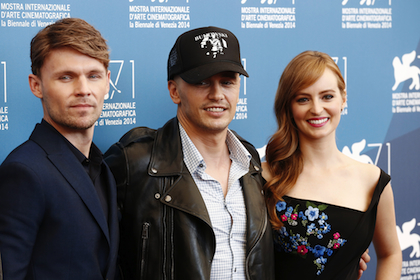 One of the biggest film festivals of the year, the Venice Film Festival, is currently underway. There are a number of films that are already garnering Oscar buzz (remember that Gravity opened the festival last year, and won seven Oscars), as well just a few that look plain awesome. Here are my picks for the most promising looking films of the Venice Film Festival!

1. Birdman:This year’s opening film takes quite a different turn from last year’s. Birdman stars Michael Keaton (welcome back, Batman/Beetlejuice/Mr. Mom!) as a washed-up Hollywood actor who decides to attempt a comeback by mounting in a Broadway play. Edward Norton co-stars as “a Brando-like method actor” who strives for reality on the stage yet is a cheat in real life. The film has been praised for its witty takedown of Hollywood, particularly of actors who consider themselves to be “thespians”. As someone who lives in a city surrounded by people who consider themselves to be “thespians” (actors are grand, thespians are insufferable), I’m excited to see that someone else clearly has issues with these folks and finally took the time to comment on this. I’m a fan of witty satire, and it appears that Birdman is, indeed, just that.

2. The Look of Silence:In 2012, American documentary director Joshua Oppenheimer released his film, The Act of Killing, a harrowing look at the Indonesian death squads of the 1960s. The film was hailed by critics for its disturbing subject matter and for persuading ageing Indonesian members of the death squads to reenact their horrendous crimes. He’s now made a follow-up to the film titled The Look of Silence, which is just as stomach-churning as his first film. The Act of Killing may be one of the most powerful documentaries ever made, so I’m curious to see if Oppenheimer’s follow-up is just as riveting.

3. The Sound and the Fury: James Franco has decided to once again adapt another Faulkner novel -- his most difficult and strongest, to be exact. Last year, Franco adapted Faulkner’s As I Lay Dying, and the film received very mixed reviews from critics. It will be interesting to see how critics and audiences react to the tale of a dysfunctional southern family who have gone from rags to riches. The film boasts an impressive cast, including Seth Rogen, Jon Hamm, and Tim Blake Nelson. I’m curious to see how Franco will adapt Faulkner’s stream of consciousness into film format; that’s no easy task. However, Hamm, Rogen, and Nelson are all extremely talented actors, so if anyone can bring a Faulkner character to life, it would be one of these three.

4. She’s Funny That Way: This looks delightfully kooky. Starring Imogen Poots, Jennifer Aniston, Owen Wilson, and Kathryn Hahn, the film follows a married Broadway director as he falls for a prostitute-turned-actress. The film marks Peter Bogdanovich’s return to directing after 13 years. Hailed as a comeback for the screwball comedy, She’s Funny That Way, reviews for the film has been a bit mixed, but I’m curious to see exactly what Bogdanovich has produced.

5. Burying the Ex:This film is a "zom-com" in the vein of Warm Bodies. Directed by Gremlins creator Joe Dante, the film follows Max (Anton Yelchin) as he is revisited by his vegan and environmentally-conscious girlfriend, Evelyn (Ashley Greene), who now happens to be a flesh-craving zombie. This proves problematic for Max, who also has a new girlfriend, Olivia (Alexandra Daddiro). I like the idea of someone’s ex coming back to haunt them as a zombie (I feel like there is a deeper metaphor there), especially if their ex is a crazy vegan. It’s a fresh twist on the zombie genre, and one that I’m curious to see.

Which films from the Venice Film Festival are you curious to see?