The 5 Most Buzzworthy Films at the Toronto Film Festival! 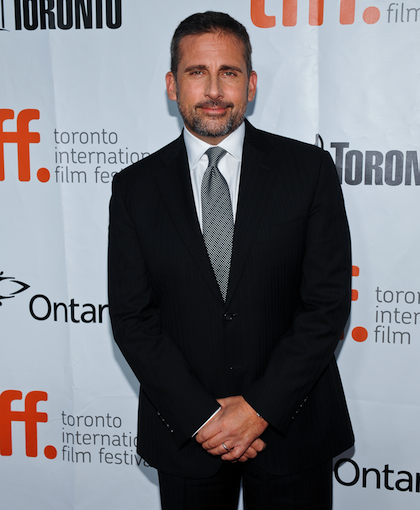 The Toronto Film Festival is on, and the mix of films range from studio dramas starring A-listers to smaller indies already garnering Oscar buzz. Biopics and pop culture documentaries seem to be all the rage, specifically films that focus on tortured geniuses. There are over 400 films on the roster, and at least half of them have already premiered, but it’s still difficult to nail down which ones are the best of the fest. Still, there have been a few standouts, including the top five that I am most eager to see:

Steve Carell seems a shoe-in for a great award season run for his role as John du Pont, a slightly mad heir who forms a relationship with Olympic wrestlers Mark and David Schultz (played by Channing Tatum and Mark Ruffalo, respectively). Director Bennett Miller helmed the project, and he’s never failed before -- he brought us previous masterpieces Capote and Moneyball. I’m not surprised that Carell is getting praise; I’ve always thought that his best role was as Frank Ginsberg, the suicidal, gay uncle in Little Miss Sunshine. It will certainly be interesting to see yet another side of Carell.

This documentary, directed by Mark Hartley, sounds completely nuts: the film focuses on the two brothers behind the exploitative Cannon Films in the 1980s. The film includes ninjas, biceps, break-dancing, and competitive arm-wrestling, so you know it’s gotta be good. I’m not even sure if the documentary has a coherent plotline, but the combo of ninjas and arm-wrestling is enough to draw me in.

It’s actually surprising that it’s taken filmmakers this long to make a biopic about Brian Wilson of The Beach Boys, considering the fact that Wilson is a bit of a drug-addled potato/genius singer-songwriter. In Love and Mercy,Paul Dano stars as the young Wilson, John Cusack plays the older version, and Paul Giamatti portrays Wilson’s meddling therapist, Dr. Eugene Landy. Dano and Cusack both have a knack for playing relatable weirdos, so it will be interesting to see them both take on Wilson.

Jon Stewart’s directorial debut is surprisingly not a comedy -- it’s a bleak drama. The film focuses on an Iranian-Canadian journalist (Gael Garcia Bernal) who is imprisoned and tortured. During its premiere at the Telluride Film Festival, the film received a standing ovation and was the talk of the festival. Bernal has never failed to wow me, and neither has Stewart, so I’m sure the film will be incredible. (Read more about it here.)

5. The Theory of Everything

You’ve seen me mention this film before, and with good reason. The Theory of Everything, which tells the story of Stephen Hawking’s first marriage, has garnered endless Oscar buzz. Eddie Redmayne looks stellar as Hawking, who conducted endless research on ALS patients to bring Hawking to life.

Which films from the Toronto Film Festival do you want to see?