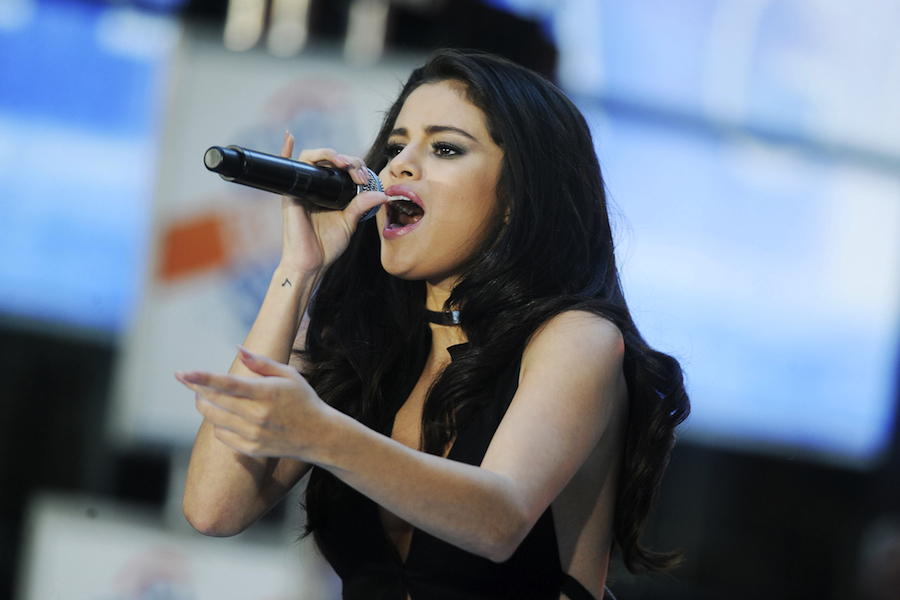 With the new release of her single “Fetish”, Selena Gomez is making huge waves in pop music (and we’re talking like tsunami-sized waves!). The new song featuring hip-hop artist Gucci Mane presents a major departure for all of us Millennials who grew up with Selena on our television screens, in our favorite children’s movies, and preaching positive self-esteem in anthemic Radio Disney hits like “Who Says”. Selena Gomez has officially achieved full-fledged pop star status.

It feels like it’s been a long time coming for Sel. She first captured our hearts on the Disney Channel, making cameos on “Hannah Montana” and “The Suite Life of Zack and Cody” before landing her own show “Wizards of Waverly Place” back in 2007. Throw in a handful of successful acting roles in TV and film and five full-length studio albums, and just ten years later Selena is reaching the incredibly high heights we always knew she could.

We’ve gotten so many different versions of Selena through her music over the years. Many might categorize her sound based on each individual album because, yes, each is drastically different in their own artistic and creative way, but I think that there are more overall themes to the many stages of Sel’s music. It’s understandable that every artist wants to change and evolve; in fact, that’s expected. But this actress/singer phenomenon deserves every bit of credibility and praise for her climb from cute child star to unstoppable pop music icon.

A couple of years into her run on “Wizards of Waverly Place”, the world was introduced to Selena Gomez & The Scene. The release of her debut album Kiss & Tell in 2009 sparked Selena’s breakout into the music industry. Songs on this record were especially angsty and relied heavily on their major punk electric guitar sound. It was an exciting time watching Selena and her band jam out in these music vids on Disney Channel commercial breaks.

Two years after her first album release, the Pop-Punk Phase had certainly gone out of style for the masses. Selena Gomez & The Scene opted for a more preppy pop sound (think early Britney Spears/Christina Aguilera). Songs like “Love You Like A Love Song” and “Hit the Lights” characterized this chapter of her music career, but perhaps one of Selena’s favorite song she’s ever recorded, “Who Says”, was the icing on the cake of this album. Regardless, I think it would be appropriate to say that this album really established what future Selena would go for in sound and style.

There are a couple of reasons for this title. Firstly, Selena finally kicked The Scene, her band from the first two albums, to the curb. This was such a necessary move for her growth as an artist. I mean, solo careers are the way to go, just ask Beyoncé or Justin Timberlake. Going solo for Selena meant more dance numbers, more EDM sounds, and, frankly, more fun. Secondly, during this musical phase, Selena finally let go of Justin Bieber. As sad as that was for fans everywhere, it was essential for her and her creativity. Check out “The Heart Wants What It Wants” if you don’t believe me.

Last but certainly not least, the best stage of Selena’s musical career so far, and she named it herself – Revival. After about a two-year music hiatus, which included rehab and an almost non-existent social media presence, Selena found her way back to the music world. In the fall of 2015, Selena released Revival, a collection of the most personal, inspirational, sexy songs she’d ever put together. By far her biggest album to date, Revival was exactly that. The album brought Sel back to life in the best possible version of herself. It also introduced a different side of her that no one had seen before – adulthood. Throw in a few curse words here and there, plus an A$AP Rocky feature, and you’ve got yourself a grown-up pop music singer.

Now that the world has gotten the superstar in Selena that it has been craving for quite some time now, it’s safe to say that her evolution to superstardom has been such a wild ride. Blame it on experience, adulthood, connections, whatever, but Selena is finally releasing her best tunes. She sounds better than ever, but more importantly, she sounds way happier. It’s an win-win for us and for her.

Starting with her big release of “Bad Liar”, a particularly different vibe for Sel and so far a pretty big radio success, Selena has been teasing a new album. She hasn’t been too forthcoming with any of the details, but we’ll take all of the incredible singles when we can get ‘em.

Selena Gomez, you are killin’ it! Bring on the age of superstardom.