The 10 Hottest Looks from the Teen Choice Awards! 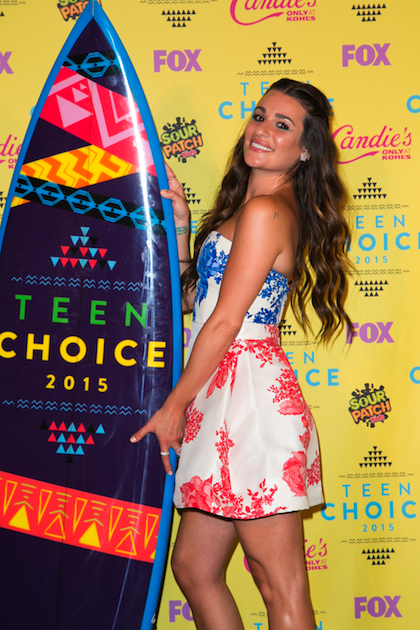 The Teen Choice Awards were this weekend, and as expected, Hollywood’s young stars brought their fashion A-game to the blue carpet!

The TCAs are pretty much the perfect place for all the up-and-comers in the biz to show off their most daring styles -- from formal couture to fun and casual, almost anything goes at this event, and seeing what these youngs stars come up with in terms of style is almost as exciting as the winners themselves! So here are 5 gals and 5 guys who stood out the most to us Sunday night!

Not only is Lea an incredibly talented singer and actress, this girl has some serious style. Lea’s look was a patriotic Monique Lhuiller two-piece accented with glossy hot-red Louboutin pumps and some sparkly jewels. For the most part, her makeup was subtle and natural-looking, but her rich turquoise eyeliner, along with her loosely waved hair, easily made this my favorite look from the evening. Congrats to this lady for winning the blue carpet game but also a Teen Choice Award for Choice TV Actress in a Comedy for her role in “Glee”! 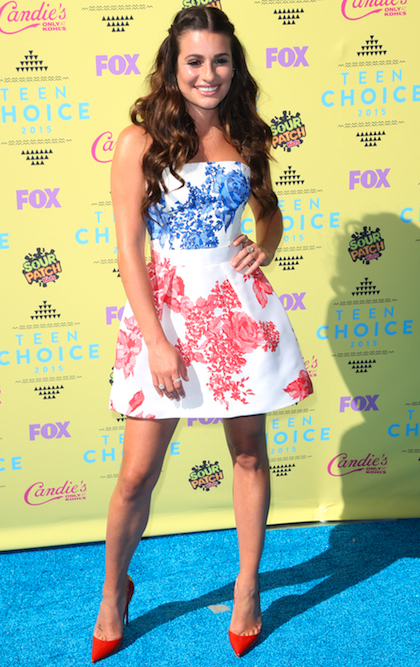 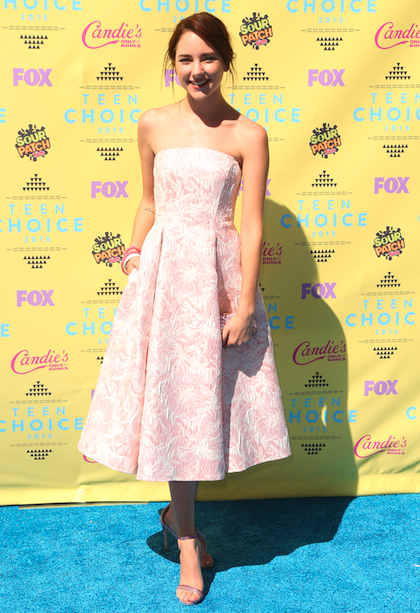 I feel like Emma Roberts almost always makes the Best-Dressed List at any awards show. Her asymmetrical Peter Pilotto Resort dress is oddly striking -- perfect for this occasion as an upscale summer look. Emma’s simple Stuart Weitzman shoes make the perfect compliment to the busy dress. 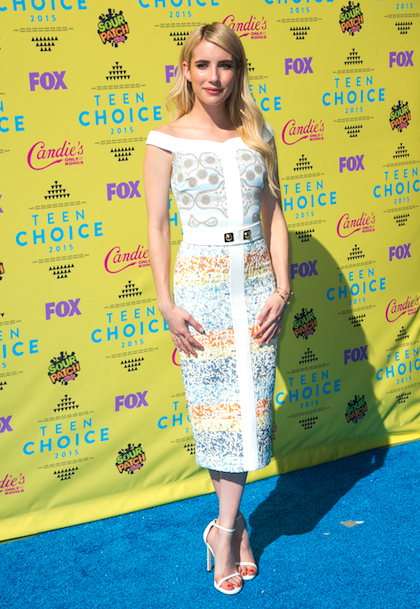 Her simple makeup also doesn’t overpower the dress, which is why Emma yet again finds her way onto my best-dressed list.

Versace, Versace, Versace, you have done it again. Shay Mitchell looked classy and stylish in this killer Versus Versace tuxedo dress. I love how only one sleeve of the jacket is patterned, while the lapel of the opposite side has three gold buttons, adding a symmetrical look to an asymmetrical dress. Her fabulous Giuseppe Zanotti shoes with three straps add a classy business-chic look to the entire ensemble. Congrats to Shay and the rest of the “Pretty Little Liars” cast for winning Choice TV Drama! 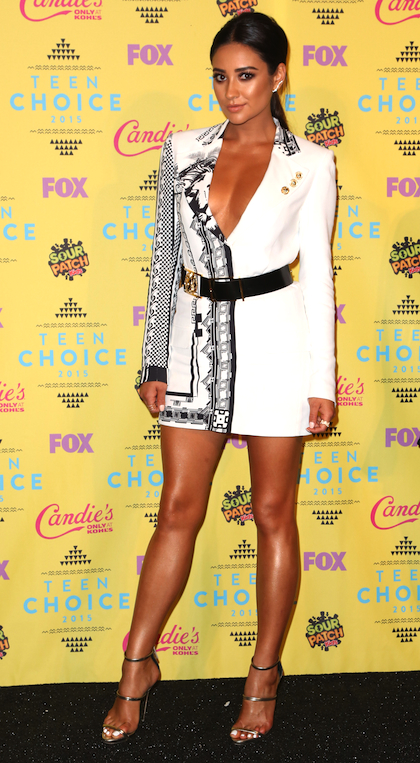 Nothing screams Summer like a cute yellow two-piece set. Sarah Hyland’s Christian Siriano top and skirt with slight pleats paired with white Stuart Weitzman pumps (we see a trend) was a fresh, fashionable look that caused her to stand out. Sarah added a pop to her light look with a bright red lip, which seems to be popular right now. This is definitely a favorite outfit of mine, and something I can see a lot of girls wearing into the final weeks of Summer. 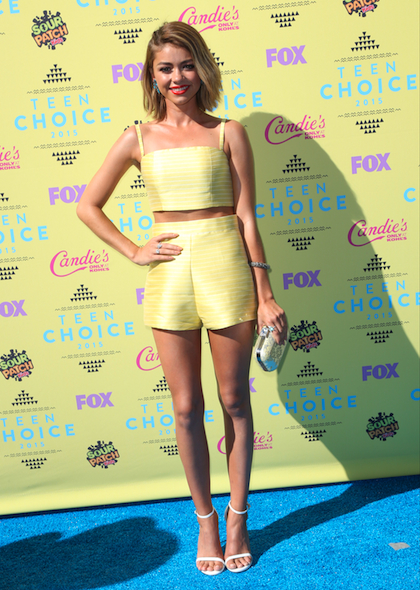 Oh my goodness, somebody pinch me -- are the Rhodes brothers even real? The two brothers, discovered on YouTube and are now models-turned-actors, will be appearing on the upcoming show “Scream Queens”, which gave them the opportunity to hit the Teen Choice Awards. The fraternal twins both channeled laid-back Cali vibes into their outfits with a hint of New York City flair. Wearing the same Adidas shoes, matching ZANEROBE pants, and stylish Topman jackets, these boys stole the blue carpet show. 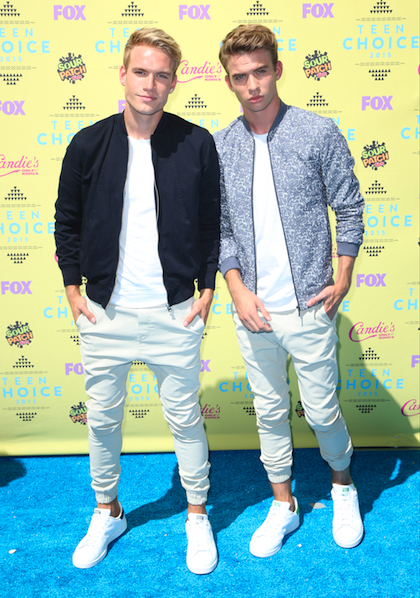 Jake T. Austin looked rugged but dapper at the Teen Choice Awards with a distressed leather jacket, dark-washed jeans, and a blue striped shirt. This stud made cool and casual look very good. He kind of reminds me of  James Dean with that slicked back hair, don’t you think? 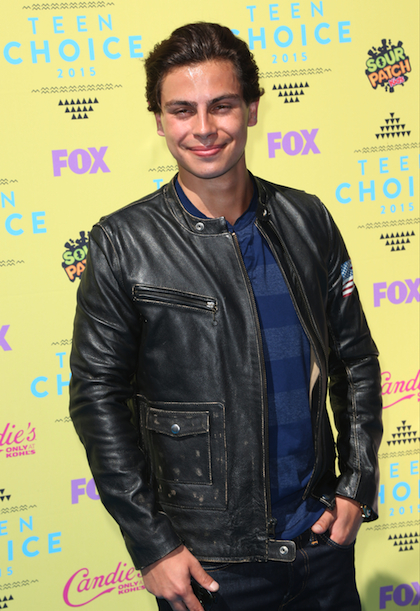 Flo Rida was definitely prepared for the California heat with his casual gray-tone attire and stylish shades at the Teen Choice Awards  While he was one of the more casual men on the blue carpet, we must admit we were obsessed with Flo Rida’s ombréd pants, gray fitted top, and his decorated deep red kicks. 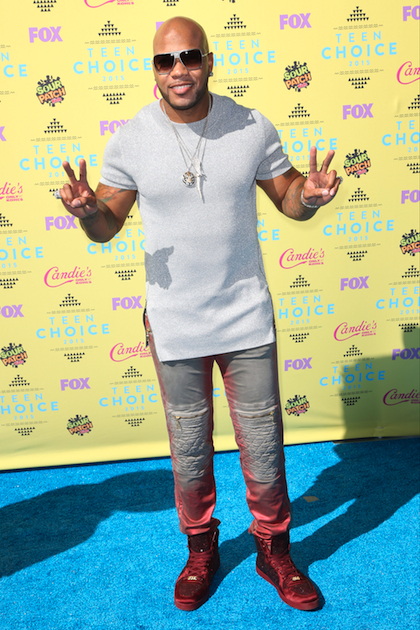 When does Scott Eastwood not look good? The Choice Movie Actor in a Drama for his role in The Longest Ride looked classy and mysterious all at the same time as he walked the blue carpet. Wearing all black and white (even his sneakers were those colors), Scott looked appropriately casual with basic kicks contrasted with a spiffy white button-down, earning him the last spot on my best-dressed list. 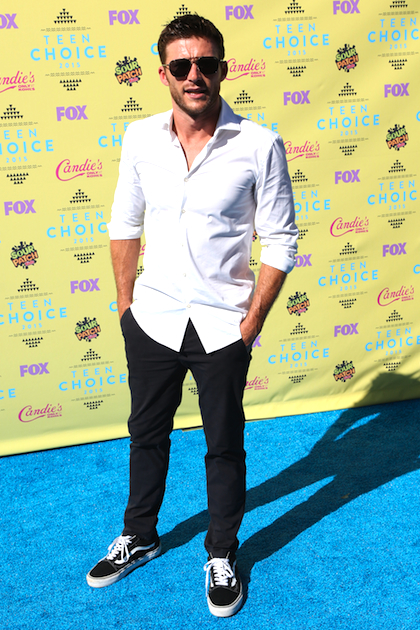 What were some of YOUR favorite looks of the night?