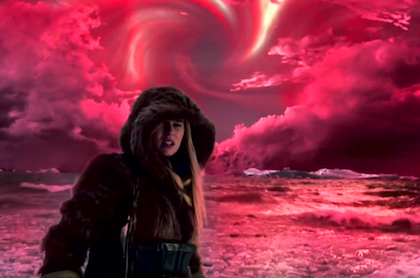 Five years after the series finale of "Heroes", we are finally getting some answers as to what happened after Claire revealed to the world the existence of people with special super abilities.

In a 13-episode miniseries, "Heroes Reborn" will show us what happened after the little Carni incident in the last season and will have new characrers with new abilities as well as old characters that we both loved and hated, including Noah Bennett, Suresh, and Hiro Nakamura.

Check out the full-length trailer!

A little confused? Me too. Why this turn to a plot similar to X-Men and the world’s fear and attempt to take down “enhanced humans”? How did this really happen?

Well, NBC is ahead of you... or, in a sens,e behind you. Let me explain -- They also released a digital series that connects the end of the series in 2010 to the new season.

The digital web series has six parts, all on YouTube, that you can check out here!

Check out the "Dark Matter" Trailer staring Aislinn Paul! Shoutout to "Degrassi" fans out there!

Shot in that first-person perspective from a character within the show is reminiscent of scenes from the original "Heroes" when Claire filmed her attempts of committing suicide; her cellular regeneration bringing the real interest in the videos.

This prequel to "Heroes Reborn" also introduces a mysterious, potentially evil protagonist set out to show the world stories of people with special abilities, or “Evos”.

All I can say is that after watching the webseries, I am super stoked to see "Heroes Reborn" even more now.