'Superman Lives' Thanks to Enlighting Documentary! 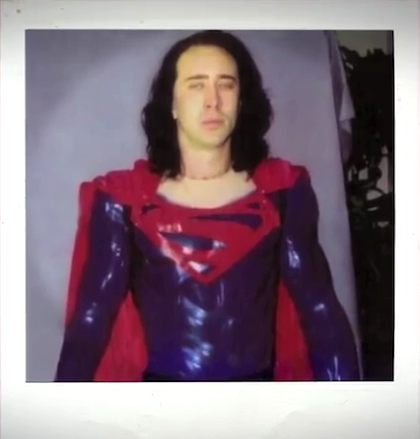 It’s been nearly a year since I stood atop my little online soapbox and decreed that Jon Schnepp’s documentary about the failed Tim Burton/Nicolas Cage Superman film was something to keep an eye out for, and I have returned to speak on it again, for it has finally been released to the masses of humanity.

Mr. Schnepp’s eagerly-anticipated film about the aborted late-'90s Superman flick is now available for purchase directly from his nerdy and sweaty internet lair, so any questions about what to get your friend or your loved one for their impending birthday has just been answered. And I’m not just touting this flick because I helped produce it. Oh sure, there were many hours where Mr. Schnepp, myself, and Tim Burton sat in a secluded boardroom and worked tirelessly to bring this feature length documentary to life. Well... that’s not entirely true, but if you pause the end credits at 1:42:13, you will see my name on the far right hand side as an honorary “Fan Backer”. Seriously, though, this funny and engaging documentary met and exceeded my expectations and should be seen by comic book fans and film nerds alike, for the film speaks to both of those passions. Peep the first 10 minutes of the flick below (NSFW warning for Smith's potty mouth):

So, after finally seeing this doc and receiving more information than I’ve ever had before on this aborted Superman project (which has been the stuff of Hollywood legend for years now), can I finally say as to whether or not Superman Lives would’ve been a good film? Well, the answer is that I honestly still don’t know. It just seems like such a far-out kind of project (even for a Superman story), and you never really get a clear look at what the story would’ve been exactly from beginning to end. But I can say that I sure as hell would’ve loved to have seen it, if only for the passion and tremendous effort that went into putting together this heroic house of cards that was unfortunately blown to pieces before its completion.

Throughout this film, you get to hear from many of the concept artists that were tasked with designing the more fantastical elements of the film, and many of their concept drawings, which survived the flaming wreckage of this superhero film-of-the-damned, are put on display for us to see. When you’re hearing artists speak and seeing their passion and energy put to work, it really is a shot in the arm that reminds you of the more imaginative aspects of filmmaking that tend to take a backseat to things like celebrity and Hollywood conjecture. Again, I don’t know if any of the designs shown would’ve flown (pun intended) on the big screen, but I would’ve been more than willing to go on the journey that these artists were setting up for us.

We also get to hear from the likes of Colleen Atwood, the Academy Award-winning costume designer tasked with clothing the Man of Steel, as well as the famed director himself Tim Burton as Mr. Schnepp interviews him in the confines of his dark gothic castle. Kevin Smith is also on hand to tell his famed story about how he was assigned to write the first draft of the film and was then promptly fired after Mr. Burton came onboard. There’s also a crazy producer on hand by the name of Jon Peters. This is a man that Kevin Smith has talked about quite frequently during the many, many occasions he’s had to speak about his involvement with Superman Lives, but this time around, we see him in the flesh, and I am now inclined to believe everything Mr. Smith has said about him, despite the protestations of Peters himself in regards to some of the more outrageous claims that come from the director of Clerks. Unfortunately, we don’t get the pleasure of having Nicholas Cage himself sit down for an interview, but his voice and dedication towards the project exists in the form of surviving video footage of him during costume tests.

And it's this footage of Cage pacing back and forth in an early design of the Superman suit while talking to Tim Burton about who the character of Superman is that really reinforces the sadness behind this missed opportunity. The excitement in Cage’s voice as he talks with Burton about this character being a true outsider and how they can have fun with the idea as well as expanding on it for dramatic purposes really makes me want to see if they would’ve hit the bullseye in terms of their ideas translating well onto the big screen or if they would’ve been way off the mark. They just seemed really invested with this project, and their enthusiasm is more than a little contagious. As I said before, it’s really somewhat of a comfort to be able to strip away the more unpleasant things that tend to associate themselves with films like this (Hollywood bureaucracy, gossip and such) and really see the storytellers working and playing towards a goal not consisting of high box-office returns but of merely telling a good story. Perhaps I’ve been blinded by this doc and am suffering from a huge case of naiveté, but I choose to embrace this feeling for as long as I can, because it reminds me as to why I fell in love with films and filmmaking in the first place.

That’s not to say that everything is sunshine and lollipops with this doc, as it does reveal the business decisions that, at first, just altered the story, resulting in the second screenwriter being fired, but then brought about the eventual cancellation of the whole thing due to budget concerns that became the cherry on top of a neurosis Warner Bros. was developing after a string of box-office failures. It’s not entirely impossible to understand where the WB suits were coming from, but it doesn’t make the death of Superman Lives any more pleasant. It’s hardly ever fun to see dreams dashed regardless of whether or not those dreams would’ve actually been transformed into something watchable.

Again, this fine documentary is available for purchase either as a DVD, Blu-Ray or digital download and is a fascinating look at what undoubtedly would’ve been a unique chapter in the history of Superman and in sci-fi/fantasy filmmaking in general, so snatch it up and let the dream live again if only for a short while.