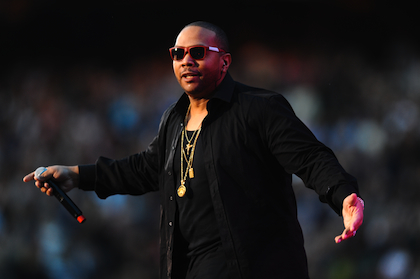 Today, we’re wishing the happiest of b-days to one Mr. Timothy Mosley! You probs know him better by his stage name Timbaland.

The songwriter/producer/rapper has had his thumb pressed firmly against the music industry for well nigh two decades now, but he’s been spinning records and laying beats since grade school. He was first “discovered” by Missy Elliott, though, at the time, she was still coming up in the industry herself. So once Missy Misdemeanor starting getting noticed around the hip-hop scene, Timbaland rose through the ranks right along with her, doing various remixes of her songs.

From there, he worked exclusively in R&B, producing for artists like Jodeci and Aaliyah. He got his big break when he produced Missy Elliott’s debut album, the still-totally-fly Supa Dupa Fly in 1997. He released his own solo debut album the following year, and ever since he has been collaborating with the hottest artists in the biz, like Justin Timberlake, Drake, Pitbull, Ne-Yo, OneRepublic, and gobs more. You’d be hard-pressed nowadays to turn on the radio and at any given moment and not hear a jam that Timbaland either had a direct hand in creating or has remixed at some point. He’s errywhere!!!

So, in honor of this omnipresent artist’s 41st birthday today, let’s pump up the volume on some of his greatest hits!