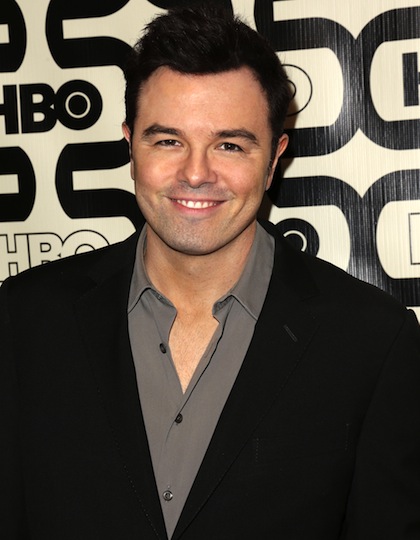 For all the shade thrown his way following the Oscars, that doesn’t seem to be stopping Seth MacFarlane. Not one itty bit.

Hollywood seems to be split down the middle in terms of their like and dislike of MacFarlane’s performance as Oscars host last month. But for every protesting A-Lister, there are just as many supporters. Either way, Seth marches forward, and several high-ranking actors are following.

MacFarlane’s next project in the pipeline is another big screen feature, following the dubious success of last year’s Ted. The film is called A Million Ways To Die In The West, and, if you couldn’t tell from the title, it’s supposed to be a comedy western. Or a western comedy, whichever. Seth will write, direct, and star in the flick, which, perhaps, is his nod to Tarantino’s Django Unchained? Already signed on to co-star with MacFarlane are two recent Oscar darlings – Amanda Seyfried and Charlize Theron (the latter of which has been romantically linked to the funnyman recently). Also expressing some interest (though not officially on board at this point) are Liam Neeson and Giovanni Ribisi. Pretty impressive cast for the writer/director who supposedly pissed off the entire industry… maybe they’re just big fans of boobs too?

A Million Ways To Die In The West is still in pre-production. Will YOU go see a comedy western written/directed by and starring Seth MacFarlane?