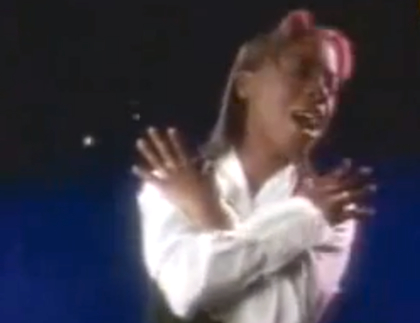 I may very well be the only person on the planet (or in the U.S., at least) who remembers Tasmin Archer. The British singer enjoyed a taste of success here in America in 1992 with her single “Sleeping Satellite”, which peaked at #32 but went all the way to #1 in her native land. She’s only put out 3 studio albums in the past 20 years (her last in 2006) and seems to be one of those brief blips on the music scene.

But that blip certainly caught my attention, and “Sleeping Satellite” was easily one of my favorite tracks from the ‘90s. It’s moody, atmospheric pop/rock vibe still appeals to me today as it did then, a great song to listen to whilst taking a brisk nighttime walk and staring at the starry heavens in search of a greater meaning. If you’re into that sort of thing.

For its part, the music video is… well, very ‘90s. It doesn’t exactly live up to the richness and profundity of the song itself, in my opinion, but what music video in 1992 did (other than Pearl Jam’s “Jeremy”)?

But “Sleeping Satellite” is certainly not the only intriguing piece in Tasmin’s body of work. Turns out, she’s actually a rather diverse artist, exploring all sorts of different sounds and styles (and much more intriguing videos). And that voice of hers is nothing short of hypnotizing. So, in addition to “Sleeping Satellite”, please to enjoy below some other offerings from this regrettably overlooked artist!