Why You Need to See 'Snowpiercer', This Summer's Sleeper Hit 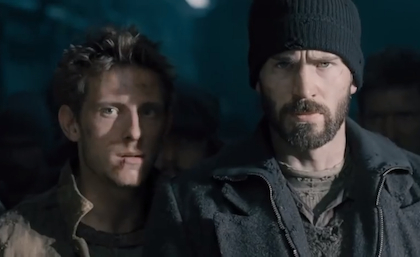 Transformers: Age of Extinction has become the highest grossing movie ever in China, and domestically, it is steadily approaching the $200 million mark, making it one of the most successful movies this summer. Now I want you to completely forget all of that useless information and instead focus on what I am about to reveal to you in regards to Snowpiercer. "Just what the blazes is Snowpiercer??" is a fair question to be asking yourself right now, although if you’re a young person who is actually saying the phrase “what the blazes”, then you’re a very funny person indeed.

Snowpiercer is the latest film from Korean filmmaker Joon-ho Bong, and it features heavy hitters like Chris Evans, Tilda Swinton, Jamie Bell, and Ed Harris, as well as some excellent performances by Korean actors Kang-ho Song and Ah-Sung Ko. It is a post-apocalyptic tale about a massive train that circles the globe while carrying the last remnants of humanity. The poor and unwanted are forced to stay in the back of the train in conditions that are barely livable. Meanwhile, the rich live towards the front of the train and are allowed to continue whittling away their lives of excess while hardly giving a thought to the frozen wasteland that lies outside the confines of their habitat.

I honestly cannot think of enough good things to say about this film. I had some exposure to Joon-ho Bong’s talent before when I saw a monster movie that he directed in 2006 called The Host. What struck me about that film was a sort of dark humor that kept popping up. It was happening so often that I started to liken the film to a genre known as "Epic Theatre", because the filmmaker was purposely keeping me from becoming too emotionally connected with the characters. But, what I finally realized after thinking about it for longer than any sane individual would, is that the director wasn’t trying to destroy any emotional connections between the audience and the characters -- he was just making it more difficult so that when the connection ultimately does happen, it has more depth to it and feels earned.

And just like The Host, Snowpiercer makes you work hard for it, but ultimately you will become absorbed by the completely absurd and yet solemn world that the film has created. And when I say it’s an absurd world, what I mean to say is that it’s actually not too far off from where we are now. The film brings up issues such as environmental worries and classism, which are things that are affecting our world today. Sure, they are amped up to the 11th degree (my amp goes up to 11), but like any decent satire, the film wants to retain its identity as an entertainment while still slapping some knowledge into our silly old heads. You can go to the movie for the ax fights, but you can stay for the raw emotion and the reflection that the film holds up to us.

And, oh yes, I said there were ax fights. Lots of ax fights. This movie serves up a veritable buffet of edged weapons, and practically every character shows up hungry. It’s a thoughtful meditation on the absurdity of classism and also an incredibly kick-ass action thriller. The film officially premiered last August in South Korea, and it is currently in limited release and on VOD, so if you have the means, do yourself a favor and skip the lines to the latest summer blockbuster and dig up this hidden gem.