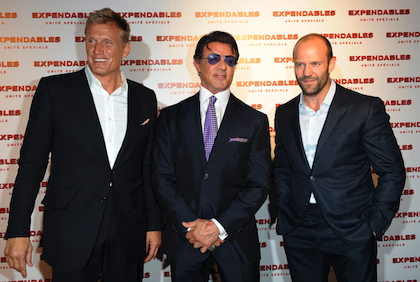 (I must be on a Sly Stallone kick right now...)

So, sometime during 2008, a group of Hollywood executives sat around a conference table, eating donuts, when one mused, “Hey, remember all those action film icons from the '80s? Wouldn't it be AMAZING if they were all in the same movie together?" The others nodded in agreement, and one pointed out, “We should throw in one young one, though. You know, someone that’s about 40. So it doesn’t look weird.” And thus The Expendables was born.

There are now three Expendables films, but I decided for the sake of continuity(?) to start by viewing the first. The Expendables begins on a Somalian pirate ship, where The Expendables, led by none other than Stallone himself, charge in to save a group of hostages. It’s quickly revealed that there is one rogue expendable (natch) -- no surprise it's Dolph Lundgren, cuz he doesn’t play by the rules. He immediately blows up the lead Somalian pirate and decides that he wants to hang him too, as this was a custom carried out by the Vikings (the more you know!). The other Expendables decide that this would be uncouth (after they blow up the rest of the pirates) and that they should instead stare off into the distance as a song by Godsmack plays. I can’t say this for sure, but I believe the song keeps repeating the words “Mumbo jumbo,” which appears to be their motto. Some say hakuna matata, others say “mumbo jumbo.”

Once the Expendables are settled back in the good ol' U.S. of A., it’s revealed that Jason Statham (the "young'un"), who is named Lee Christmas, has been dumped. He appropriately pouts on his crotch rocket and rides to a tattoo shop that also serves as a motorcycle garage (that can’t be safe). Mickey Rourke rides in with a blonde hooker he picked up off the corner and proceeds to give Stallone the fastest tattoo in the history of tattooing. Rourke is easily my favorite character in the film, as he seems to serve no discernible purpose than to spout off random bits of grizzled wisdom. He looks as though Johnny Depp decided to go on an extremely long vision quest, and when he returned, this was the result. I particularly like the fact that he smokes out of a peyote pipe, which, for all we know, could have contained actual peyote.

The Expendables are revealed to be a glorified version of Charlie’s Angels” (okay, technically, they are mercenaires), so they are sent on their next mission. Stallone meets none other than Bruce Willis and the quintessential '80s action star, Arnold Schwarzenegger, in a creepy church. Arnie pops in donning a Tommy Bahama shirt (because that’s what old guys wear) and tells Stallone he will have dinner with him in a thousand years before wandering out. Willis informs Stallone of his actual mission, which is to take down an evil tyrant on a small Latin island, a renegade CIA agent. Stallone goes back to share this information to his guys (who, if they don’t deliver, according to Willis, will be “chopped into little dog treats”), and Randy Couture decides to reveal his past in an insane monologue. While also donning a shirt from Tommy Bahama (because that’s what old guys wear), he drones on about his cauliflower ears and how he beat the shiz out of his college roommate for making fun of them. This scene serves no purpose whatsoever and his entire monologue is glorious.

Once on the island, Stallone and Christmas (I have to call Statham Christmas) meet a Sexy Seniorita (Giselle Itie) who fills them in on all the death and destruction on their island. As Christmas attempts to hook up Stallone and Sexy Seniorita, it’s revealed that Lundgren has stowed away on their plane. (He’s gone full rogue!!!) The trio is quickly apprehended by the bad guys, in which they make a daring escape. Sexy Seniorita stays behind as Christmas and Stallone board the plane and perform what is easily my favorite action stunt in the film. Statham pops out of the plane as though he is a WWI flying ace and proceeds to blow up the entire dock, including 40 random soldiers (ooops). Watch the insanity for yourself:

The film proceeds to become even nuttier from there. The pair gathers the rest of the Expendables -- except for Lundgren, who is now working for the bad guys full-time -- who agree to take down the villains. Jet Li (one of the other "young'uns") laments that he doesn’t get paid enough and should get paid more because he is the shortest. I'm not sure what the logic behind that is, but either way, this comment was quite uncomfortable. Terry Crews joins the gang by happily grabbing a bunch of machine guns and blowing crap up. The crew heads back to the island, where they spend the rest of the film slaughtering everyone and everything in sight. The film’s action scenes are so absurd that you can’t help but laugh; it’s as though someone decided to attempt to parody Michael Bay. The best part is the fact that, after killing Lundgren, it turns out that he’s alive and better than ever, as he joins them for a beer and some wisdom from Rourke at the end of the movie.

The Expendables made me particularly eager to watch the second and third films. If this was the first one, I can’t imagine where they go from here. But I’m eager to find out.

Do you have a favorite summer blockbuster guilty pleasures you want me to review this summer? Let us know!