Start Your Engines for Season 5 of "RuPaul's Drag Race"! 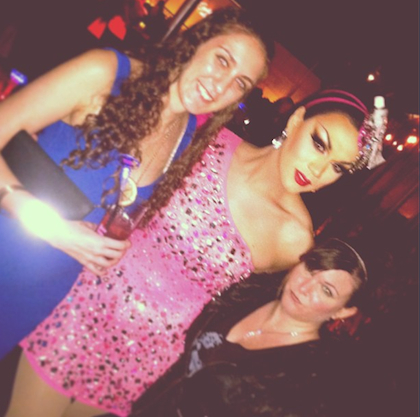 Can you believe that we are already on the fifth season of the fabulous LOGO show "RuPaul's Drag Race"? To celebrate, the show threw a premiere party last week at The Abbey in West Hollywood, and hunty, let me just say that this may have been one of the most decadent parties I have ever attended. Waiters navigated their way through the crowd with cocktails by Absolut (fun party detail: the glasses lit up!) and delicious appetizers. Music blasted through the stereos as the queens mingled. Photographers snapped pictures left and right. And at the end of the night, we all got treated to the season premiere of Season Five (I think that this may be the craziest season yet!). Afterwards, the queens in attendance lip synched for their lives.

The queens were dripping with charisma, uniqueness, nerve, and talent as they donned their most exquisite outfits. We had the pleasure of meeting Manila Luzon, who greeted us like old squirrelfriends and was decked out in pink from head to toe, including a pink dress with spikes; Latrice Royale was nearly mobbed by adoring fans and looked incredible in a black dress also adorned with spikes (spikes are apparently in -- take note, Racers); ice queen Raven turned out to be anything but icy as she informed us that one of the best places to find fashionable frocks is the local Goodwill; and one of the queen judges, the fantastic Michelle Visage, who, like Raven, was more than happy to chat with us about fashion. She also told us that this season of “RuPaul’s Drag Race” is probably the most interesting to date.

The new ladyboys of Season Five were also out and about, but they were a little harder to recognize. We got to chat with Jade Jolie, who looked adorable with a hot pink wig and unicorn jewelry and told us to expect lots more rainbows, unicorns, and jewelry from her this season. She also mentioned that this season’s group of girls are probably the most diverse the show has ever seen, and to expect a bit of drama (of course, the show wouldn’t be complete without it!). Monica Beverly Hillz looked wondrous in a Cleopatra-inspired get-up, and informed me that, in her opinion, Season Five is the hottest (and bitchiest) one to date. When I asked for more details, she coyly shook her head and said I would have to wait and see! Funny girl Penny Tration, who made sure everyone knew who she was by having her name written on her dress in sequins, told me that she had a ton of fun on the show, and to expect some very unique challenges this season. All of the new queens looked simply gorgeous, and I’m pretty sure that we are in for yet another great season of "RuPaul’s Drag Race".

A few of the celebrity judges were spotted throughout the crowd, including talented writer Chaz Bono, who truly does have a dazzling smile in real life, and Camille Grammer. And of course, the queen of them all, RuPaul took the stage (in a crisp black suit) to introduce us to the next season of “RuPaul’s Drag Race”.

The new season premieres TONIGHT on LOGO -- It’s time to start your engines, Racers, and may the best woman win!