'Star Trek Beyond' Trailer Promises to Put The "Trek" Back in "Star Trek"! 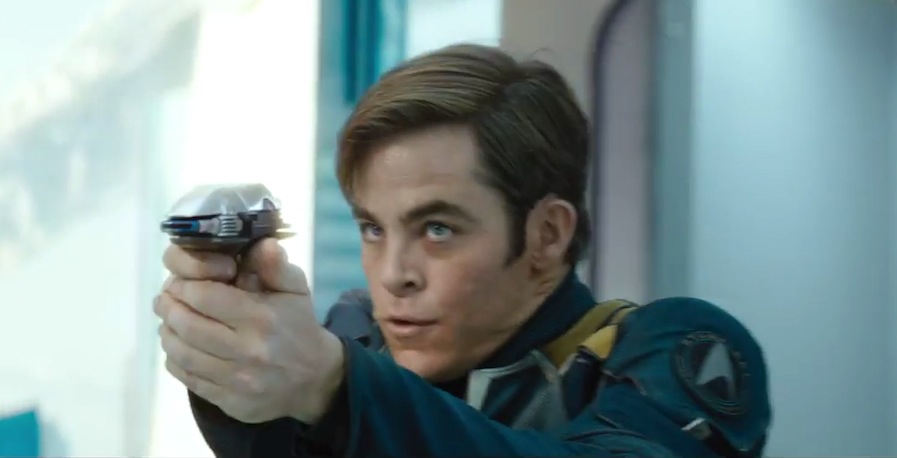 You know, I was thinking today about how Akira Kurosawa’s film Stray Dog expertly represents, even more than The Seven Samurai, the beauty, sorrow, and thoughtfulness of--OMG THE NEW STAR TREK TRAILER IS HERE!!!

We’ll get back to that other topic at a later time. Right now, we have a sci-fi feature film to discuss. As I sit on my front porch sipping a lemonade, whittling a stick with my trusty pocketknife, and listening to the soundtrack of a Ken Burns documentary, I find myself reflecting fondly on Star Trek and it’s long journey and evolution over the years. Star Trek, in it’s purest form, is a sprawling story of exploration and discovery with messages of tolerance, space politics that occasionally happen to mirror our own, and conflicts designed to stretch and strain the moral fiber of our heroes. Now, throw in a ton of jargon about warp cores, phaser banks, and Neutral Zones, and you have a franchise that is slightly tough to get onboard with without a small amount of time and patience, but one that is greatly rewarding if you are able to do so. Yes, with a smattering of television shows and a series of films that have ranged from "great" to “let’s just talk about something else”, there are many gateways for you folks out there that have contemplated becoming a Trekkie. Well, if that above trailer is any indication, then Paramount Pictures wants you to make up your mind fast, and they’re willing to throw The Beastie Boys at you if it will help.

In 2009, Trekkies saw their reason for living return to the big screen with a Red Bull-infused energy that was clearly designed to draw non-fans to the theaters. In this instance, the powers-that-be were able to have their cake and eat it too because, while Star Trek ’09 was a slick action vehicle that abandoned complex moral conundrums, political intrigue, and rewrote Trek history with a manic smile that charmed the pants off the masses, it still took care of the universe's staple characters with tender loving care and created an emotional core that supported the spectacle quite nicely. Four years later, that same consideration for the fans was taken to a somewhat vulgar extreme with Star Trek Into Darkness, a film that tossed a few too many familiar things at the audience in a tone and manner that was clearly piggybacking on the grit and gravel of The Dark Knight series. I should point out that the film did very well at the box office, but a change in the tide was still noticeable.

Well, message sort of received, apparently, as Paramount Pictures and director Justin Lin have splashed this latest film with a new coat of paint and tricked it out with a gnarly new sound system. There are things for a Trekkie to appreciate in this trailer, if you are able to get past the blaring and unexpected sounds of "Sabotage". Exploration is finally being brought back into the mix as it seems our heroes find themselves stranded on an alien planet, which was a familiar occurrence (nearly every episode) on the '60s "Trek" television series and its later incarnations. This means we get to encounter some new alien lifeforms and new civilizations, which is what "Star Trek" promises us right there in the spoken intro. Again, this element of discovery is important and what ultimately separates Star Trek from Star Wars. It's right there in the titles, actually -- one franchise "treks", the other "wars". Get it? In Star Trek, the characters are an extension of our own lives and therefore the concept of meeting a foreign and intelligent species means something in these stories because it would mean something to us. And for every casual relationship, friendship, or encounter that we do see with an alien in Star Trek, it is born on the back of an implied moment of discovery that is, again, something that makes Star Trek special to us nerds that wonder about what the future holds beyond the next iPhone.

“But enough of that fluff, Greg! We want action, comedy, and the like!” Oh, don’t worry, my friends, this movie looks to be filled to the brim with quips from our beloved Bones and physical comedy from our favorite Scottish engineer. Space battles featuring alien termite ships are bound to get your adrenal glands going, and if it isn’t, then I’m sure a cornucopia of photon torpedoes will! And if that whole exploration thing isn’t enough and you’re still yearning for something a little more familiar and Trek-like outside of the high-octane action, then may I point out that they are [*ahem*] destroying the freaking Enterprise?! We shouldn’t really be surprised. though. This is the 3rd film after all, and the original Enterprise was destroyed in Star Trek 3: The Search for Spock too. But whereas the demolition of Kirk’s ship in the ’84 Trek film was the result of a harrowing adventure, this latest bashing of the USS Enterprise seems to be the jumping-off point for the story.

And now I’ll spend the next three paragraphs discussing the importance of warp cores in the history of Star Trek. Zefram Cochran invented the war core back in... well, maybe I’ll come back to this at a later time. For now, sit back and ruminate (at least for a few moments before resuming your frothing-at-the-mouth over The Force Awakens) on the action spectacle heading our way July 22 and keep your eyes peeled for more Trek developments as they happen.