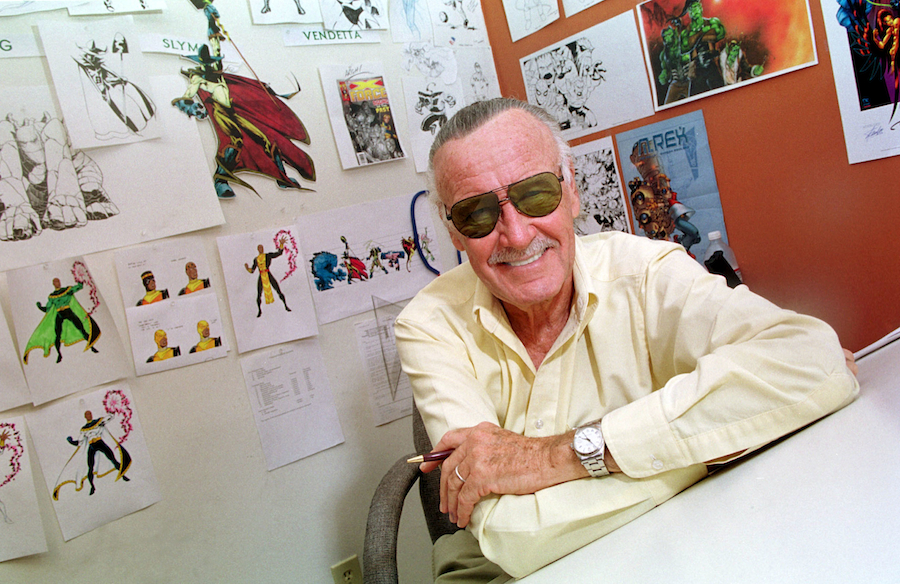 Stan Lee, an incredible writer and the legendary editor-in chief, publisher, and chairman of Marvel Comics, passed away today at the age of 95, just 6 weeks shy of his 96th birthday.

Born Stanley Martin Lieber, his career in the world of comics is a story known by many. In 1939, Stan Lee became an assistant at the new Timely Comics. He started off just helping where he could -- filling inkwells, grabbing everyone lunch, proofreading, etc. By the 1960s, Timely Comics would evolve into Marvel Comics.

A young Stanley Lieber made his comic book debut in 1941 with the text filler "Captain America Foils the Traitor's Revenge" in Captain America Comics #3, under the pseudonym “Stan Lee”. Also during that year -- and not even 19 years old yet -- Lee served as the interim editor for the comics. Though he was young, he was incredibly passionate and had knack for business, and stayed on as the editor-in-chief and art director until about 1972, when he became publisher.

Apart from his time in comics, Lee also served in the United States Army as a member of the Signal Corps, where he would fix telegraph poles and other communications equipment. He was later transferred to the Training Film Division. There, he wrote manuals, training films, slogans, and even cartooning here and there.

The most famous part of his career would begin in the late-1950s. Back then, DC Comics editor Julius Schwartz had just revived the superhero archetype, bringing the comics immense success with their characters. Because of this, Timely Comics publisherMartin Goodman assigned Lee to create a new team of superheroes. At the time, Lee didn’t know if he wanted to stay in this industry and in this career, so his wife suggested experimenting with stories he preferred, since he’d have nothing to lose if he was planning on changing careers anyway.

With that, he created all of your favorite heroes. But he made them real people with real problems and a flawed humanity, instead of the perfect heroes with no relatable traits that readers had seen in the past. They were complex. They were us.

The first group he created, with artist Jack Kirby, was the Fantastic Four, which found immediate success and popularity. From there, Lee worked with Kirby to create the Hulk, Thor, Iron Man, and the X-Men.

With Kirby, the duo created the superhero team The Avengers, which gathered a bunch of their new characters and also revived 1940s characters such as the Sub-Mariner and Captain America.

The man was simply incredible. His work went far beyond just dynamic characters and intriguing storylines. He always insisted on giving credit where credit was due, and introduced the practice of featuring a credit panel on the splash page of each story, naming not only the writer and penciller, but also the inker and letterer.

He also wanted the comics to engage the readers and build up a community between them and the creators. One of his goals was always to make sure the fans saw the comic creators as friends. When letters to other comics publishers were typically addressed “Dear Editor”, letters that came into Marvel Comics were frequently addressed to the creators by first name.

Throughout the 1960s, Lee did a lot for Marvel Comics. At the time, he scripted, art-directed, and edited most of Marvel's series. He also moderated the letters pages, wrote a monthly column called "Stan's Soapbox", and wrote endless promotional copy, where he’d often sign off with his famous motto, "Excelsior!"

Not only did he create countless favorite characters, but he also covered real world issues in his comics. Topics such the Vietnam War, political elections, student activism, the dangers of drug use, and more, all became present in multiple issues of his comics. He often wrote comics that also worked in social commentary about the world around us, often dealing with ideas of racism and bigotry and addressing issues of discrimination, intolerance, and prejudice.

Later throughout his life, Lee became known as the public face for Marvel Comics. He appeared at comic conventions all across America (including his own, Stan Lee's Comikaze in Los Angeles, now known simply as L.A. Comic-Con), spoke at colleges, and more. He did signings, spoke on panels, met fans, and stayed engaged with the community of comic fans around the globe. Young Hollywood was honored to be able to chat with the legend himself at San Diego Comic-Con:

In 1981, Lee moved to California in order to help develop Marvel's television and movie properties. He often served as an executive producer for many Marvel film adaptations and other movies.

As if the man couldn’t get any cooler, just wait. In 2010, he launched theStan Lee Foundation, which is set on trying to help improve “access to literacy resources, as well as promoting diversity, national literacy, culture, and the arts”.

Since Stan’s death was announced this morning, Hollywood has taken to social media to honor his legacy.

There will never be another Stan Lee. For decades he provided both young and old with adventure, escape, comfort, confidence, inspiration, strength, friendship and joy. He exuded love and kindness and will leave an indelible mark on so, so, so many lives. Excelsior!!

Thank you Stan Lee for making people who feel different realize they are special.

He lives forever through his work. What a giant.
With great power comes immortality. ??? pic.twitter.com/t395qw9H0L

Damn... RIP Stan. Thanks for everything. pic.twitter.com/TMAaDJSOhh

He was a friend. When we were afraid, he gave us strength. When we were alone, he gave us a family. He may be gone, but his teachings live on through us, his students. Wherever we may go, we must carry on his vision. And that is a vision of a world united. RIP Stan Lee pic.twitter.com/ieicZNWzWr

We’ve lost a creative genius. Stan Lee was a pioneering force in the superhero universe. I’m proud to have been a small part of his legacy and .... to have helped bring one of his characters to life. #StanLee#Wolverinepic.twitter.com/iOdefi7iYz

Stan...more than a master of stories, you always seemed like a master of living. I will look to you for inspiration for the rest of my life. You live on. xoxo Your Wasp
.
#liveon#StanLeepic.twitter.com/JRA2aRM3bG

How many millions of us are indebted to this guy, none more so than me. The father of Marvel has made so many people so incredibly happy. What a life and what a thing to have achieved. Rest in peace Stan

One of the things Lee was most notorious for was his numerous cameos in Marvel films and television shows. Whether he was playing himself or a minor character, the cameos were something fans always looked forward to when watching Marvel content. It was like a hidden easter egg for all of the longtime fans of Lee. His cameos were always something that could put the biggest smile on your face, whether he cracked a joke, gave advice, or even said nothing at all. One of my favorite cameos of Lee is in Spider-Man 3, when he says to Peter Parker, “You know, I guess one person can make a difference … 'nuff said.”

‘Nuff said indeed, Stan. You’ve made a difference in the lives of many, and you will be greatly missed. Excelsior!